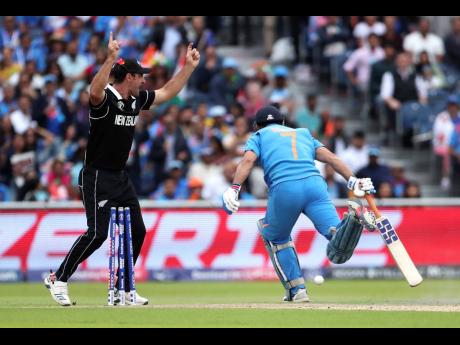 It also moved New Zealand, thriving once again as the underdogs, back into another final -- this time on the other side of the world.

India never recovered from an unprecedented top-order collapse that plunged the team to 5-3 -- the top three of Rohit Sharma, KL Rahul and Virat Kohli were dismissed for 1 each -- then 24-4 as they chased 240 to win at Old Trafford yesterday.

MS Dhoni (50) and Ravindra Jadeja (77 in 59 balls) gave the Indians hope by putting on a World Cup-record 116 for the seventh wicket, but India were dismissed for 221 with three balls remaining to give New Zealand an 18-run win.

"To go out on the basis of 45 minutes of bad cricket is saddening," said Kohli, India's captain and the biggest superstar in world cricket. "It breaks your heart."

Kohli thought 240 was "chaseable on any surface," only to be one of the batsmen bewitched by the seaming and swinging deliveries of New Zealand strike bowlers Matt Henry and Trent Boult.

Sharma, the top run-scorer at the World Cup with 648, lasted four balls before edging Henry to wicketkeeper Tom Latham. Kohli lasted six balls before getting trapped lbw by an inswinger from Boult, a review showing the ball would have clipped the bails and leading Koli to throw his bat into the air in disgust.

Eleven deliveries, three wickets, one run. And one devastated nation.

It was the first time in international history that a team lost its first three batsmen all for 1.

"It was mayhem out there with the new ball," Boult said. "It was a dream start for us."

Kohli acknowledged it was the key part of the game.

"The way they bowled with the new ball, moving it around, it was an outstanding skill level on display," Kohli said.