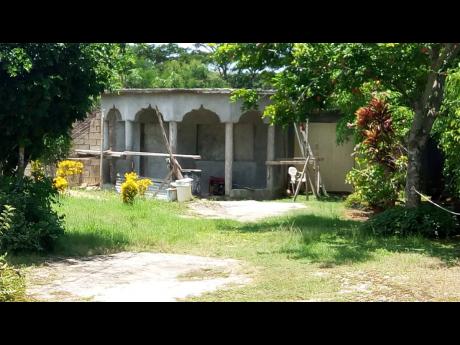 The home of 56-year-old businesswoman Stephanie Brissett, whose decomposed body was found inside last Friday.

Residents living in Top Road, Little London in Westmoreland, are still expressing shock at the discovery of the decomposing body of a female returning resident that was discovered in the vicinity of her home last Friday.

During a visit to the community yesterday, several residents told THE WESTERN STAR that the victim, 56-year-old Stephanie Brissett, was a very peaceful and secretive person.

"Stephanie was living overseas fi some time and then she come live a Top Road," said one resident, who gave his name as Mr Johnson. "A good while now mi know har, and she has always been very quiet and peaceful. From she come from foreign and a set up the little house, she never trouble anyone."

Johnson said Brissett lived alone, but they heard that she had a son in St Elizabeth.

"Stephanie buy a nice car some time ago, and when she come from foreign she use to sell clothes all bout inna Savanna-la-Mar, but some tiefing boy come tief har car and from that she get a blow," Johnson said. "From dem thief the woman car and har goods dem, har life change."

The concerned community member stated that no one knew how long Brissett had been dead for, because lately she became very secretive, and was not relating much with persons within the community.

In the meanwhile, superintendent in charge of Westmoreland, Gary McKenzie, told THE WESTERN STAR that the police are presently carrying out investigations and cannot determine as yet if foul play was involved in her death.

"The police got a report that the decomposing body of a female was found at Top Road in Little London, and went to the community," he said. "On reaching the location, the scene was processed, and the body removed to the morgue for a post-mortem examination. Due to the state of decomposition, the police will have to wait on the post-mortem results to know the true cause of her death."