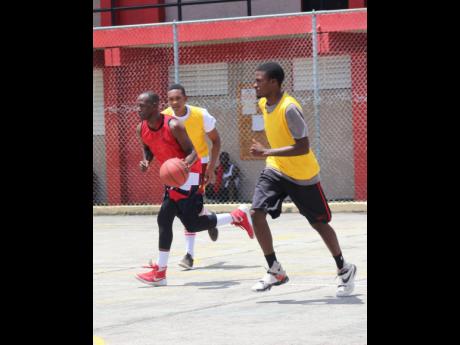 Two-time champions and number-two seed in the Western Basketball Association (WBA) Elite League Granville Jaguars are on the brink of elimination after Saturday's semi-final loss left them trailing 1-0 in their best-of-three series.

Interim captain of Jaguars Otis Foster admitted that the absence of top scorers David Gordon and captain Dave Black, has dampened their scoring.

But he believes that they will get it right this evening to keep their title hopes alive.

"Most of the guys that are still here are over 30, and we work, so we don't get the time to train. Dave Black has gone to China. David got a scholarship and had to go overseas, so we are not risking that, and a couple of other younger players are off the island," he said. "Yes, we are down, we are missing them, but we are not out as yet. We still have two more games to go, so it's just for us to find our mojo for (tonight's) Game Two."

After taking a 1-0 lead over the number-one seed, captain of the Warriors, Levar Rose, is confident that they can book a finalist spot in their first season when they contest Game Two on Thursday.

"The number-one seed in the regular season beat us by one or two points, so if we had won that game, we would be the number-one seed. For some strange reason, because of the ranking, people think we are not up for it. However, we are up for the challenge. The championship isn't even as important as beating Knights because they are on a high horse, and our objective was to come up and make it to the finals," Rose said.