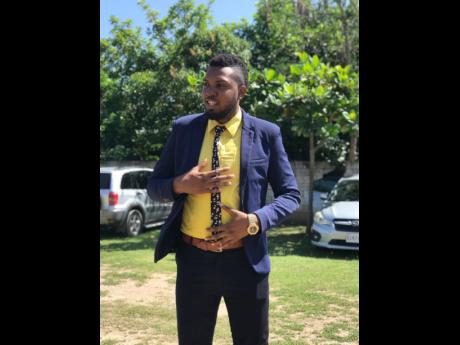 Raheim Betty has big dreams. Not only does the communications student at the Northern Caribbean University want to make his mark as a television presenter, but he sees himself as the next Tyler Perry of the entertainment industry.

Betty, who is an up-and-coming gospel artiste, said that his ultimate goal is to produce shows, plan and host events, write music and books and do just about everything in entertainment.

His dream might seem steep, but considering the hurdles he has had to overcome to get to where he is now, for him, it's just another challenge.

Obstacles were something Betty has had to deal with all his life - from being the kid who everyone picked on in school to being the child relatives and teachers counted out, saying he wouldn't amount to much. He had to overcome his own insecurities and convince himself that he could be anything he wanted to.

Betty, who started singing publicly when he was 12 years old in the seventh grade at Knox College, said his talent helped in unearthing the many abilities he never knew he had.

"Being told things before like nothing good could come from me, I would be very afraid to sing or even try do things. One day I tried out for the choir, and the rest is history," he said.

"Music for me is a method of escapism. I use my singing to escape the harsh realities that life has to offer. Singing is how I connect and maintain the relationship I have with God."

Later in life, Betty faced other challenges. While in pre-university, Betty had to drop out because he could not afford the tuition.

He said during the time when he remained idle, he went through the whole gamut of emotions - pity parties, anger, sadness - until he finally gave his troubles to the Lord and embraced Him as his Lord and Saviour.

That relationship also brought a positive mindset, and it was that new confidence that allowed him to realise he couldn't go through life blaming others for things not working out in his own life.

"I also learnt that I should not count on anyone to love me. I should first love myself. Once you love yourself, no one can break you easily," said Betty, who was a finalist in the 2017 Jamaica Cultural Development Commission Gospel Song competition with the entry Jesus I'm Sold Out To You. He has also been featured on Traig Taylor's Holy and Righteous.