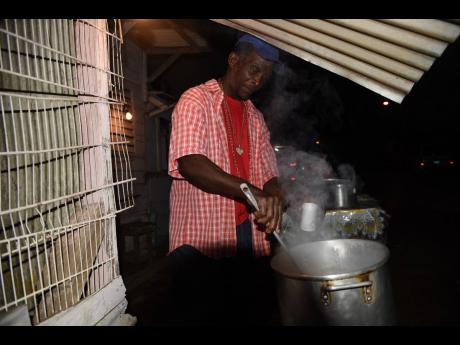 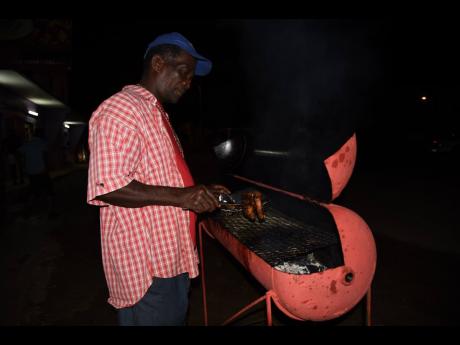 Residents of Siloah in north-east St Elizabeth and its environs can depend on Carol 'Go So' Smith for a piece of jerked chicken or a cup of chicken soup on any given night.

But although he is popular, he admits there are nights when he doesn't jerk more than two chickens. He also admitted that sometimes he only manages to do one.

"Even sometimes you come out and can't sell the one," he said.

Smith, who got the name Go So because of how he indicates that he is in agreement with someone, said that on good nights, which he noted are very few, he would credit five or more chickens from local farmers.

Smith, who has been doing the business for more than 23 years, is faced with other difficulties financially.

"Sometimes you can't even pay back for the chicken; you have to work otherwise and pay for it," he explained.

"Nuff people feel sey from you a jerk chicken you a mek money, but dem not even know the half," he said, before explaining why he continues. "It's because mi live out on the front (roadside) and mi can't sleep in the noise, so that's why mi 'burn' (stay up late) some time until mi ready fi go bed. If a never that, mi wouldn't come out."

He sells a quarter of jerked chicken for $500, but said there are times when he has to take $300. He also sells red peas chicken soup.

"Sometimes mi wi sell 50 cups, but there are times when I don't even sell 20. Sometime mi even hafi give away soup," he said. "All when I don't have anything mi still a give."

Smith said he used to do fish soup, but when a bone got stuck in one of his customer's throat, he took it off the menu.

"The man wanted me fi use di little crumbs mi mek to carry him to the doctor, and mi couldn't do that," he said. "People want me to do it (fish soup), but mi nuh have no money fi carry nobody go doctor, so mi just no do it again," he said.

Smith, who is also a small cane farmer, said he would welcome any help to push his business to the next level.