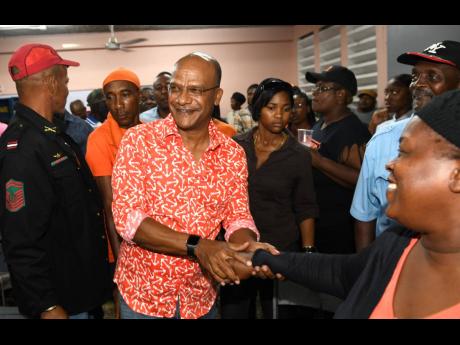 Central Manchester Member of Parliament Peter Bunting greeted by supporters at the May Day High School, Knockpatrick, Manchester, in June.

The JPS has applied for an increase in light bills. The utility filed a rate review application with the Office of Utilities Regulation (OUR) in which it is seeking to recover costs related to investments in infrastructure, renewable energy support, and new technology.

If approved, customers can expect to see an average increase of 3.2 per cent in overall monthly billing by early 2020.

“We’re making significant investments in our infrastructure and systems every year to maintain, upgrade and ensure the safety and reliability of the equipment that serve our customers every day,” said Emanuel DaRosa, president and CEO of JPS.

“This investment will go into upgrading transmission and distribution lines, replacing thousands of poles, replacing all streetlights with Smart LED streetlights, improving and renewing our fleet of generators and modernising the grid to improve reliability while enabling it to accommodate more renewable energy sources in the future,” he added.

Holness says no to mining in Cockpit Country

Prime Minister Holness said his government is committed to protecting and preserving the Cockpit Country. His declaration comes amid a firestorm of opposition to bauxite mining in the area which has significant geological and historical value.

The Prime Minister said that only environmentally sustainable projects will be pursued in the area.

Peter Bunting has released a polled that he paid for, which showed that he has a 18 percentage point advantage over Dr. Peter Phillips.

According to the RISE United Campaign, the entity behind Bunting’s bid to unseat Phillips as the president of the People’s National Party (PNP), 39 per cent of respondents said Bunting would be the best leader of the PNP, compared to Phillips who got 21 per cent.

The poll was conducted by noted pollster Don Anderson.

“A convincing 39 per cent believes the challenge is a good idea versus 23 per cent who think it is not,” the campaign said as it argued that Bunting’s decision to run for the presidency has been welcomed by the society.

According to the Bunting campaign, the PNP has closed the gap on the governing Jamaica Labour Party to five points since the campaign began two months ago.

The RISE United Campaign said that 36 per cent of respondents believe that Bunting would stand a better chance of winning against Andrew Holness in a national election versus only 16 per cent who felt Dr. Phillips had a better chance.

A quick pick ticket brought good luck for a Barbadian who won the Super Lotto jackpot of $283.5 million.

The winning ticket was sold in St. Michael, Barbados, one of the eight Caribbean territories that play the multijurisdictional super millions lottery game.

“We are pleased to welcome another Super Millionaire to the prestigious club! The Super Lotto allows persons the opportunity to realize all their dreams from the proceeds of a super-sized jackpot. We encourage all our winners to spend their prize money wisely and make the most of this life-altering opportunity,” Supreme president and CEO, Ann-Dawn Young Sang.

FARMERS TO GET $400 MORE FOR COCOA

The price per box of cocoa will move from $2,600 to $3,000. Industry, Commerce, Agriculture and Fisheries Minister, Audley Shaw, has announced the increase prices payable to farmers on Monday.

“As we continue to support our farmers, I am pleased that we have successfully increased the prices by $400 per box and we are not stopping there,” he said.

Minister Shaw, who was speaking at the67th Denbigh Agricultural, Industrial and Food Show, also announced a revamp of the current measures being implemented to manage and control the outbreak of the Frosty Pod Rot of Cocoa disease.

This includes placing a stop on the current pruning of the cocoa plants, which destroys approximately 90 per cent of the tree.

“I have ordered it stopped because there is technology elsewhere such as Colombia (which can help). Since I ordered it stopped, I sent a team to Colombia, which prunes the tree no more than 10 per cent and they have found a way to control the Frosty Pod disease…the technology exists,” he said.

Caused by the moniliophthora roreri fungus, the disease can greatly reduce crop output once the disease is established.