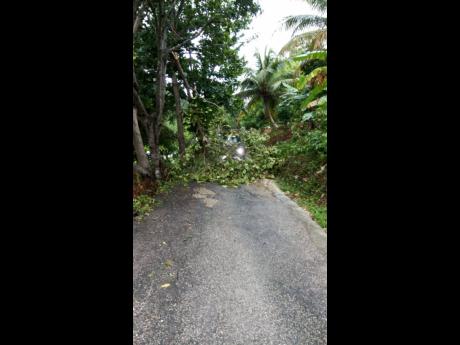 A section of the roadway in Bamboo district, Hanover, which was completely blocked following the thunderstorm that lashed western parishes on Sunday.

A thunderstorm that battered down on western parishes on Sunday and yesterday resulted in millions of dollars in damage to crops and blocked off roadways.

Residents living in various farm communities in south St James, Trelawny and Hanover have been greatly affected by the water and strong winds, which destroyed large fields of crops.

One farmer, who gave his name as Everald James, of Ramble district in Hanover, told THE WESTERN STAR that he has lost much of his bananas, plantains and corn.

"Wi think it was just a normal, everyday rain, but when it start, mi see dozens a mi banana and plantain tree dem a fly past mi window," he said. "One a mi fowl coop mash up, and a whole heap a mi chicken them blow weh and dead. A several other farmers inna the area suffer great damages, just like mi."

The farmers say they are now calling on the Ministry of Agriculture and the Rural Agricultural Development Authority's western regional office to assist them in getting back on their feet.

THE WESTERN STAR also learnt that yam farmers in Trelawny and banana farmers in south St James also lost large amounts of crops in the thunderstorm, which many persons say was like a minor hurricane.

Several communities were left without electricity for hours on Sunday and Monday because of the storm.

Up to yesterday morning, several roads in eastern Hanover were impassable owing to fallen trees and landslides, while there were reports of areas being flooded in western Hanover.