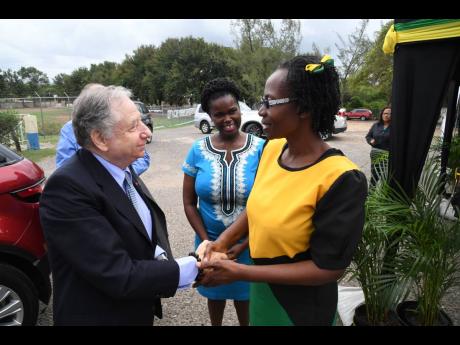 Hazard Primary School in Clarendon became the first school to benefit from the 'X Marks the Spot' Crosswalk Road Safety Campaign, which is being implemented by JN Foundation, in collaboration with funding organisations, UNICEF, the FIA Foundation, and the Abertis Foundation, based in Spain.

The project at Hazard Primary involves the cnstruction of signage for bus lay-bys, pedestrian gates and the widening and paving of the sidewalks.

Onyka Barrett Scott, general manager of the JN Foundation, said that the campaign will continue with the upgrading of 17 other schools,during the next three years.

"More recently, in 2018 and continuing to 2021, through our partnership with UNICEF, we are in the process of identifying 18 schools, and Hazard Primary School was the first. We will make critical infrastructural changes in the schools zones, to ensure that children are safer on their way to school and back home," she said.

Since the start of the year, 269 persons have lost their lives in 244 road crashes across the country. Of this number, motorcyclists accounted for the highest demographic, with 82 persons.

Mariko Kagoshima, UNICEF representative, said that her organisation was happy to be part of the campaign. She pointed out that, globally, road traffic injuries are the leading cause of the death of children and young people, from five to 29 years.

"In Jamaica, an average of three children are killed each month, as a result of road traffic accidents, and that is three too many," she psaid. "And, many more children suffer devastating injuries from road crashes."