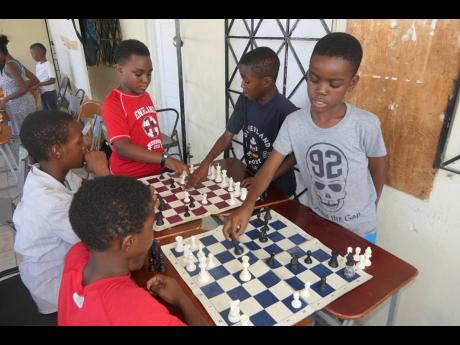 These children engage in a game of chess.

Youngsters of Longville Park in Clarendon enjoyed one week of chess, music, and art, courtesy of the National Housing Trust (NHT) Summer Camp staged under the theme 'Think, Play and Explore'.

The camp, an annual event organised by the social development department of the NHT, added chess and art to what was normally a music camp.

Partnering with the Tourism Product Development Company, they engaged Longville Park as well as five other communities - three in Kingston (Majesty Gardens, Golden Heights and King Heights) as well as Angels Groove (St Catherine) and Providence Heights in Montego Bay.

Leon Burrell, senior social development officer, told CENTRAL STAR that the camp, which hosted 300 campers, was aimed at encouraging young people to have a positive outlook on their lives.

"We wanted to use the tools that were offered through music, chess and art to help them to develop a positive mindset towards their work, the people around them, and towards their entire environment," he said.

Antoinette Hird, president of the newly formed chess club, said the camp had a powerful impact on the children of the community.

"They were so enthusiastic as they embraced the music lessons as well as the chess sessions. Chess has so empowered the young people that some who didn't even know anything about it, because of the camp they are now enthused and want to be involved," she said.