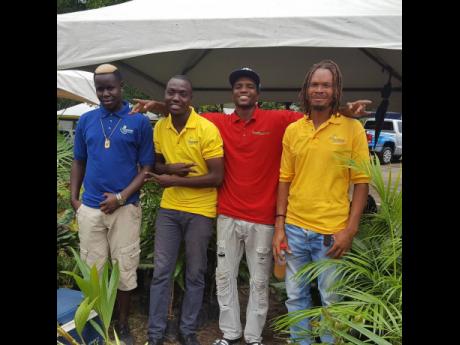 Landscapers who are part of Flourish Landscaping

It is said that plants do not grow merely to satisfy ambitions or to fulfil good intentions, they thrive because someone expended effort on them.

Andrew Blair and Kenroy Edwards are living by that mantra, being the co-founders of Flourish Landscaping, operating out of Cherry Tree Lane in Four Paths, Clarendon.

The company offers general landscaping services, inclusive of lawn installation and lawn care, and exports ornamental flowering plants and fruit trees. Blair told CENTRAL STAR that the team began offering its services in 2013, but became a registered operating business in 2016.

Blair said the inception of Flourish Landscaping came through the need for employment. The University of the West Indies graduate said the business has since expanded, offering employment to others.

"It's about nine of us now. It keeps me and my business partner permanently employed, and it allows us at times to offer some work to some freelancers," he said.