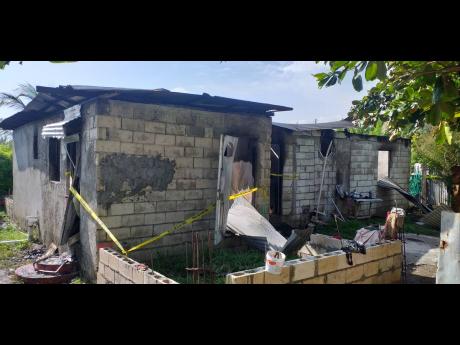 Photo of house in Buff Bay where Maureen Johnson was stabbed to death. The home was then destroyed by fire.

Olivier Housing Scheme in Portland was rocked to its core Tuesday night after a woman was stabbed to death, allegedly by her common-law husband.

According to information from the Buff Bay police, about 10 p.m. Maureen Johnson, 50, and Elroy Griffiths, 52, had a dispute when she was stabbed.

Griffiths then allegedly set the house on fire. The police and fire department were alerted and on their arrival, the house was seen engulfed in flames.

Johnson's burnt remains were found on the veranda. The scene was processed and the body removed to the morgue. Griffiths is now being sought by police.

Germaine Campbell fought back tears as he struggled to come to grips with his mother's murder. He said that he was at his home when he was alerted by a niece.

Campbell said that he rushed to his mother's house and found her lying on the veranda covered in blood, with fire coming from just about every section of the house.

"My sisters and I tried desperately to drag her away, but the fire was too much. I got burned on my back and I had to just stand afar and watch, while inhaling the odour from the burned flesh of my mother," he said. "I haven't slept since last night (Tuesday) and to me it is like a nightmare that will not go away anytime soon."

Johnson's two daughters and four grandchildren are now homeless after the fire, and the children might not be able to attend school at the start of the academic year, as everything was burnt.

Campbell added: "Every single item of clothing, furniture, electrical appliance, money, school uniform, and other valuables were lost in the fire. My sisters are now staying with their aunt in Buff Bay and they are not coping well. They are traumatised and continue to cry repeatedly. She (Johnson) was really the breadwinner, as she provides for them. It is going to be difficult getting our life back to what it was before."

Councillor for the Buff Bay Division Dionne Hunter told THE STAR that she was in shock.

"It feels like I was watching a movie when I arrived at the scene. I stood there and could not believe. I still can't believe it," she said.

Hunter said she knew the deceased and Griffiths and even spoke to them recently.

"About two weeks ago, I spoke to them and even mentioned to them why they aren't getting married yet. I didn't see any emotions from them in a bad way. This is a situation that is unbelievable," she said.

She said the residents are in shock because occurences like this in the community are rare.

"We weren't looking out for this brutal attack. Something like this happened about 20 years ago nearby and so it wasn't something that we expected. It really has a great impact on all of us who live in the community," she said.