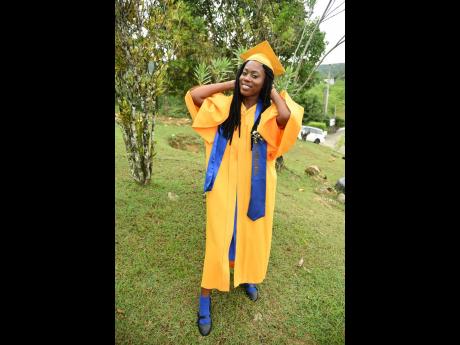 Shaday Elliott fought many challenges on her way to create history at Aberdeen High School.

Elliott was one of the first students to enter the gates of the upgraded institution. The school received full high-school status in 2016.

Elliott will go down as the first head girl and one of two students from the first graduating class to leave with 10 Caribbean Secondary Education Certificate (CSEC) subjects.

All these, Elliott said, came with challenges. She first had to deal with her mother leaving to work overseas in order to finance her children's education.

"That's what drove me to do well," she said. "She wants the best for us, so the best way to repay her is to make her proud."

She said schoolmates would even tell lies on her in an attempt to derail her drive to succeed.

In the end, Elliott persevered. She passed math with grade three while in the ninth grade. In fourth form, she got four subjects - physical education (grade one), principles of business (two), information technology (two), and human and social biology (two).

"That was a rough year because you know you had to prepare for SBAs (school-based assessments), and at the time I was playing netball and having the school choir to deal with just the same," she said.

In grade 11, she was appointed head girl, describing it as a pretty exciting moment.

"The first head girl of the school? Who nah go feel proud of themselves and excited," she laughed.

She praised her friend Tashel McLeish and the teachers who pushed her to achieve success.

"She (Tashel) always told me, 'Shaday you can do it'. She pulled me through high school, mi nah go tell no lie," she said.

As for the teachers, Elliott said that at one point she was thinking they were getting on her nerves, but later found out it was all for her good.

"It (the push from teachers) helped me to become a better person. I have three teachers that are my mentors, who are always encouraging me," she said. "They always told me, ' you are the head girl for Aberdeen, and you need to leave with something. You are in the first batch, and you need to set the mark and make history'. So yeah, it helped me to be a better person right now, and I'm grateful for that."