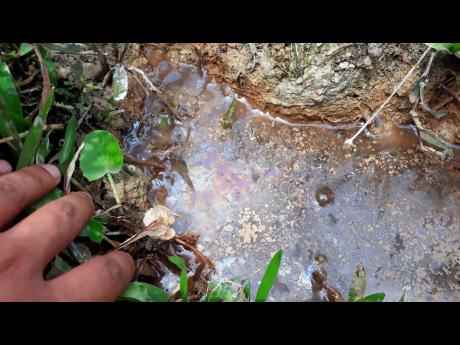 This oil seep was discovered by a woman on her farm in St Mary.

Oil has been found in St Mary, but it is not enough to be drilled and extracted for commercial purposes. The fuel was discovered by a woman who told authorities that she stumbled upon an "oily substance" on her farm.

The woman is said to have told authorities that she has been noticing the substance since she was a child. Curious to find out what it was, the woman contacted the Petroleum of Corporation of Jamaica (PCJ).

Preliminary analyses undertaken by the PCJ confirmed that the substance is in fact oil. The PCJ said the newest oil seep apparently originates from a source rock from the Jurassic geological period, which was approximately 160 million years ago, making it older than any rocks found on or offshore Jamaica to date.

An oil seep is a natural leak of crude oil and gas that migrates up through the seafloor and ocean depths.

The first offshore live oil seep was discovered by Tullow Oil in February 2017. The discovery by the woman increase the number of live oil seep on-shore to two.

The PCJ said it intends to continue its quest for new oil seeps.

"We will continue to expand our search for tell-tale signs of Jamaican hydrocarbons seeps in both the on and offshore with our partners, and encourage the public to call us should they identify any substances they consider to be 'oil-like' so that we can investigate," Brian Richardson, the PCJ's oil and gas manager, said.