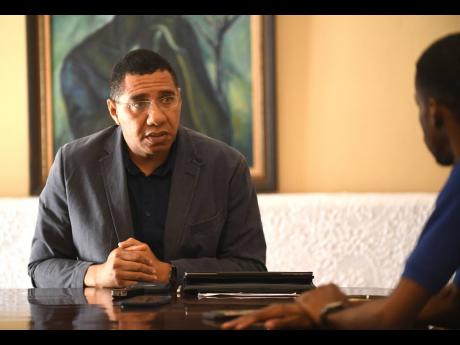 Some of the persons parading on the nation's streets wearing police uniforms or army fatigues and carrying weapons with them may be criminals who have been nurtured by gangsters.

Prime Minister Andrew Holness said on Thursday that gangsters are investing in the education of children in the hope that they will serve their criminal purposes.

"They prey upon the communities; they prey upon your children. They literally recruit them. You may not see it as recruitment, but the dons in your community - I am certain you know who they are - they see your son going to school, [he] doesn't have proper shoes, doesn't have lunch money..., and all of a sudden, they are providing them with lunch money and clothes and bringing them to places. And before you know it, your son is sidetracked," Holness said.

"Some of the criminal enterprises are so sophisticated that they look for the brightest, pay their school fee, and encourage them to join law enforcement, to become lawyers... . That is the level of thinking that some of the criminals are doing now. They want to know the bright ones because they want them to help them with cybercrimes," the prime minister added.

Holness' comments, which were made at a press conference at the Office of the Prime Minister on Thursday, come days after bail submissions made on behalf of a soldier and 34 others who are accused of being members of the Spansh Town-based Clansman Gang were refused in the Home Circuit Court.

In another case, Detective Corporal Lloyd Knight and 16 others are on trial for gang offences. They are alleged to be members of the Uchence Wilson gang.