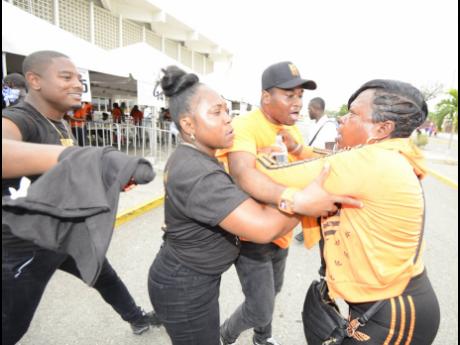 Supporters of Dr Peter Phillips and Peter Bunting go at each other during Saturday’s election for the presidency of the People’s National Party. The stakes were high, and temperatures, at times, rose to fever-pitch levels. The incumbent, Phillips, prevailed by 76 votes.

Jamaica will yet again miss its target to keep road deaths under 300. Statistics from the Road Safety Unit indicate that 295 persons have died in crashes since the start of the year.

Kenute Hare, director of the unit, said the fact that the country will not meet its target of 300 is worrying. He said motorcyclists and pedestrians continue to be the road users being killed in the traffic environment.

Of the 295 road deaths, vulnerable road users such as motorcyclists, pedestrians, pedalcyclists and pillions, account for 64 per cent of fatalities.

The St. James Health Department is set to get an additional 30 vector control workers to assist with the destruction of mosquito breeding sites in the parish.

A number of dengue cases have been reported on the island.

They will be selected from the Housing, Opportunity, Production and Employment (HOPE) programme, and will join the 11 permanent staff members and 63 temporary workers already engaged in mosquito eradication activities.

“We want to get to close to 100 or so temporary staff to work with the 11 permanent staff to create more teams to be deployed in the communities across the parish,” Health Minister Dr. Tufton said.

He said that additional vehicles will be provided for vector control and private contractors have been engaged for fogging.

“We are pleased with their performance. This year, in six out of the nine core subjects that we entered our students, we had pass rates of 70 per cent and above,” she said.

The WCJF offers CSEC instruction to adolescent mothers at its 42 Trafalgar Road campus in Kingston and through its virtual delivery interface (VDI) at rural sites.

Police reportedly found a gun hidden in a stove and has charged one man in connection with the find.

Sean Allen of Dalling Street, Westmoreland, has been charged by detectives in St. Elizabeth with illegal possession of firearm and ammunition.

Reports are that on Tuesday, September 3, a police team searched Allen’s home and found a 9mm Smith and Wesson pistol and a 9mm cartridge in a stove. He was taken into custody, interviewed and subsequently charged.

A pest controller from Tharp Street, Falmouth in Trelawny was charged for murder and wounding with intent by detectives in Trelawny.

He is Romario Green, otherwise called ‘Boo’. It is alleged that Green and another man went to the home of Cordel Clarke where they shot and killed him and injured another man.

He was subsequently held by the police had charged.

The Pan American Health Organization (PAHO) is requesting an initial US $3.5 million from donors to cover short-term health care and other needs for the population in the Bahamas affected by Hurricane Dorian.

The devastating category 5 storm made landfall exactly one week ago in northwest Bahamas, and severely affected the health sector, with significant destruction of equipment and medical supplies and electrical and water supplies in Abaco and Grand Bahama.

Some 73,000 persons were affected by the storm, and there are hundreds of people in shelters in the disaster zone. While 43 deaths have been officially reported thus far, mass casualty numbers are expected to rise significantly as more areas become accessible and search and rescue operations continue.