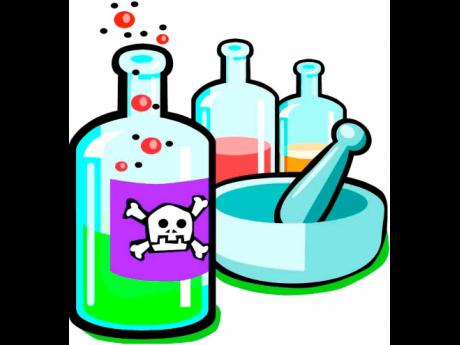 A St James man reportedly drank gramoxone minutes after hearing that his family member had confessed to killing his (the family member’s) babymother.

The man is now said to be in critical condition in hospital after drinking the deadly chemical.

The saga began after 40-year-old Jeconiah Dixon of Roehampton district confessed to murdering his 36-year-old babymother Suzette Reid, a cash pot vendor of a Lindos Hill address in Westmoreland.

Reports by the police are that about 3 p.m. last Monday, residents stumbled upon Reid’s body which was seen lying in bushes off a dirt track in the Westgate Hills community of Montego Bay.

The police then launched an investigation which led them to Dixon’s home. A series of interviews were conducted with him and he later broke down and confessed to killing Reid.

Reports by the police are that Dixon and Reid got involved in a domestic dispute when he strangled her to death, and transported her body to the location and dumped it.

Woman Sergeant Ulette Lewis Green, the liaison officer for St James, says she is not aware of the gramoxone incident, but confirmed that Dixon confessed to killing Reid.

He has since been charged with murder

Lewis Green says she his calling on couples who are faced with domestic problems to seek counselling, as this would help to avoid physical confrontation.

She further stated that there are several organisations, community groups, and even the police who can assist in offering counselling to persons facing domestic problems.

She made an appeal to these individuals to seek professional help to avoid committing acts of violence.