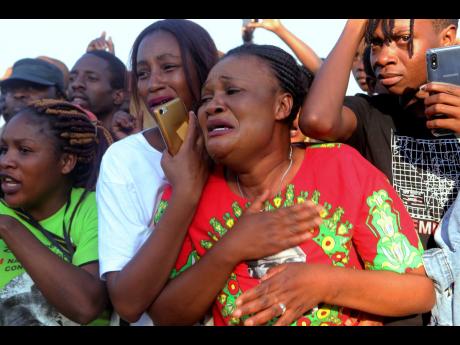 Supporters of Zimbabwe’s former ruler, Robert Mugabe, react upon the arrival of his remains at the RG Mugabe airport in Harare yesterday.

Alpart could be closed for up to two years

Operations at the Jiuquan Iron and Steel Company (JISCO)/Alpart Alumina Refinery in Nain, St Elizabeth, are set to be suspended for up to two years.

This is likley to leave scores of persons unemployed and hurt economic activities in southern St Elizabeth.

Mining Minster Robert Montague said operations are being suspended to facilitate the modernisation of the plant.

“One of the principal objectives of the pending modernisation programme is to markedly lower the refinery’s production cost. This will increase its competiveness, save jobs, reduce waste and generate income for the Government of Jamaica,” Montague said.

With the 2019 Atlantic Hurricane season now in its most active period, Prime Minister Andrew Holness is calling on Jamaicans to remain alert and ensure that they are prepared for any eventuality.

“This means stocking up on the supplies that you will need in the event of a storm… your candles, batteries, canned food, water supply and warm clothing,” Holness said.

Prime Minister Holness also urged residents in low-lying and flood-prone areas to adhere to the evacuation warnings and alerts.

“Whilst your property is important, I would think that your life is more important than your property. So it is wise now, as we are in the hurricane season, to start putting together your alternative plans,” he said.

10,000-volunteer army to clean up beaches

The Jamaica Environment Trust (JET) has registered 189 cleanup sites for International Coastal Cleanup (ICC) Day Jamaica 2019, which is to be held next Saturday, September 21.

“Over 10,000 Jamaican volunteers are gearing up for ICC Day next week, where they will tackle the huge quantities of solid waste which have been transported to our coast by the heavy rains which have been affecting the island recently,” said Suzanne Stanley, JET’s CEO.

“Most of the garbage we remove on ICC Day comes from inland sources – carelessly discarded waste, which is carried by gullies, rivers and drains to our coastline. The possibility that we will see the coastline of every major coastal town in Jamaica cleaned up by Jamaican volunteers for ICC 2019 is a huge milestone.”

JET has registered 3,000 volunteers for its flagship cleanup on the Palisadoes Strip in Kingston, and will work with 138 site coordinators to carry out cleanups in all 14 parishes, including 19 underwater cleanups.

The service will be held on September 19 at the University of the West Indies, Mona, Chapel at 1 p.m.

Condolence books will be opened from Tuesday, September 17 through to Thursday, September 19, at the Houses of Parliament and the Ministry of Foreign Affairs and Foreign Trade.

Promoters mounting party posters on heritage sites across the Corporate Area have been warned to desist from the practice.

“I want to say to promoters who are guilty of posting on our heritage sites to desist from doing so,” Kingston’s mayor Delroy Williams said.

According to the mayor, party posters have been seen on the several historic landmarks across the Corporate Area. These include the clock in Cross Roads and the Ward Theatre in downtown Kingston.

“It does not look good, it is not appropriate and it is not in keeping with the industry. The creative industry ought to protect the culture and history of the City of Kingston,” he said.