‘I thought it was a big fish’ 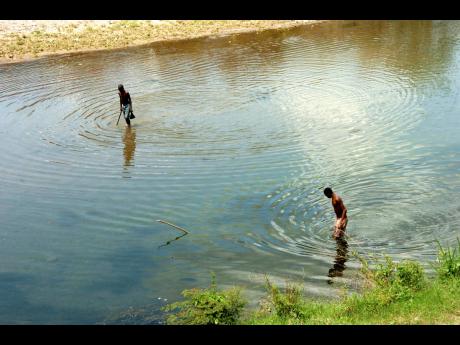 These boys go fishing in the Rio Minho in Clarendon. The river is notorious for being a habitat for crocodiles.

Richard Brown was Oral Lee’s fishing partner last Sunday. He told THE STAR that every Sunday, they would go spare fishing in the Rio Minho. He said that on the eventful day last week, they saw a crocodile in the water but they believed it left that area of the river as it disappeared.

So when the 50-year-old saw that his friend appeared to be fighting while in the water, the last thing on his mind was a crocodile attack.

Brown said that he went to the area where he thought his friend dived and thought he went after a big fish.

“Mi deh outside the water waiting on him to come up. About a minute or so mi see him emerge from the water bottom with his face full a blood,” he said.

Immediately, Brown went to assist Lee to safe grounds and then went to get help. Since being hospitalised, Lee has drained his life savings on medical bills.

“This have mi worried a lot because a fishing mi use to survive. The doctors dem seh to mi seh if I don’t get the $110,000 I need to call them and let them know so they can put off the surgery because I need that money. I did have a change, enuh, but when I came to the hospital, I had to pay for the test and everything they did so far. I didn’t know that there was a different total for the surgery. So I am asking anyone who can help me out, please do, so that I can get back on my foot,” he said.