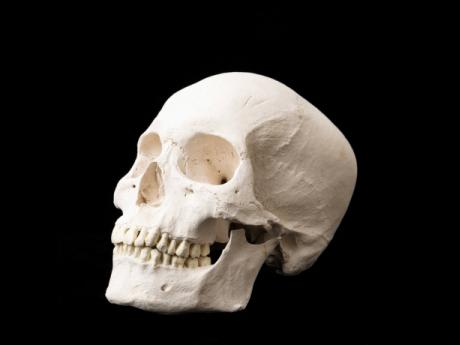 An image of a human skull.

Resid ents of Chelsea district in Irwin, St James, made a shocking discovery last Friday when they stumbled upon a human skull on the bank of the Montego River.

It is unclear how the skull got there or whose remains it is, but speculations are rife that it could be linked to obeah.

He reasoned that it is likely that a scammer may have beheaded someone as part of a human sacrifice.

In 2016, this newspaper reported that more and more scammers were turning to the occult world to protect them from evil and law enforcement officers. Some have been wearing guard rings, others drink from human skulls, and some are thought to be engaging in human sacrifice.

At the time, then head of the St James police, Senior Superintendent Steve McGregor, said the reports indicate that some scammers have been drinking weird substances from human skulls as part of occult rituals.

Following last Friday's gruesome discovery, one woman in Chelsea said she would not be surprised if obeah influenced the decapitation of the unidentified person whose head has been found.

The Freeport police reported that residents in Chelsea alerted them of the discovery of the human skull last Friday. According to the police, a team went to the location and discovered the skull of a human at the bank of the Montego River, which flows through Irwin.

"We have heard the allegations about human sacrifice, but our first obligation is to wait on a forensic testing to determine the identity, and also a cause of death," a senior officer said.