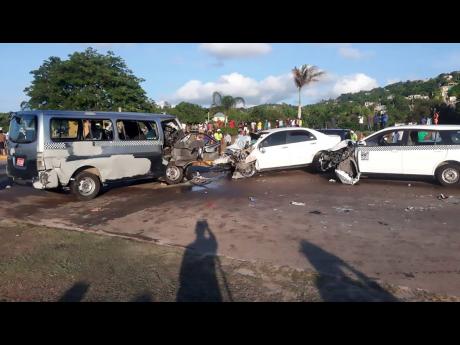 Onlookers view the crash scene in Montego Bay yesterday. Two of the drivers were killed.

Two persons were confirmed dead, and 17 others injured following a three vehicle collision along a section of the Flankers main road, in Montego Bay, St James, yesterday afternoon.

The deceased are Oneil Henry of a Falmouth address, and Anthony Forbes from Flankers.

"Mi seh wi si wen the Corolla man fly past wi and next thing wi hear is a loud crash, and si wen the man fly over the median and crash straight inna the mini bus," a fruit vendor told THE STAR. "Then the AD Wagon which wen a come behind the Corolla, crash inna the back. All a wi run go up deh, and a pure blood and pickney a bawl out."

The vendor said that onlookers then helped to take the injured from the vehicles and got them transported to hospital in different cars.

The police reported that about 4 p.m., Forbes was transporting students from downtown Montego Bay towards Flankers in a mini bus.

On reaching close to the community, Henry, who was driving a Toyota motor car which was travelling in the opposite direction, lost control of the vehicle, which climbed over the median, and crashed head-on into the mini bus.

A Nissan AD Wagon motor car was travelling behind the Toyota, and that driver also lost control and collided in the rear of that vehicle.

Henry was killed on the spot while Forbes was pronounced dead at hospital. Twelve students who were passengers in the bus, along with five other adults in the Nissan, sustained injuries and were rushed to hospital, where they were admitted in serious condition.

One senior officer told THE STAR that since the start of the year, St James has seen a significant increase in road fatalities. According to the senior cop, most of these fatalities result from speeding.