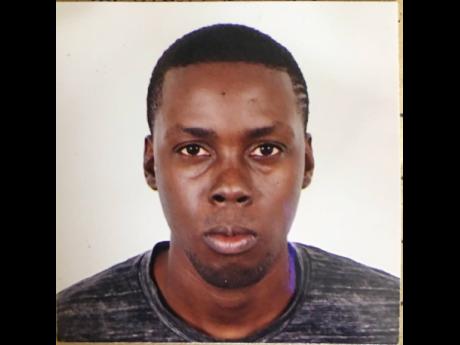 It's been almost a month since 23-year-old ex-cop Adrian Brown has gone missing, and his family is hoping that he will be returned home.

Claudette Bryan, Brown's mother, told THE STAR that he went missing on August 28 when he left his Trelawny home to return a car.

"We have not seen or heard from him since. We've been calling him. His phone never rings, it just going straight to voicemail. We don't have no clue, no trace, nothing, " she said.

Bryan said they reported him missing to the Falmouth police the following day. She said his disappearance has been extremely hard on her family.

"His sister sleeps with his photo every night. He is her best friend. All the gifts that he bought his little brother for his birthday, he sleeps with everything," she said. "I can't sleep, can't eat, I can't even comb my hair. I had him from I was 17 years old. I grow him without a father, and now I have to grow my grandchild not knowing where his daddy is."

Brown left the police force in April under controversial circumstances. He was even arrested and was to face the courts next week in relation to a matter involving the botched purchase of a car. But Bryan is adamant that her son is innocent and was not a corrupt cop.

"Please if he himself in any trouble with anybody that we don't know anything about, bring him home. Before you kill him, bring him home to his family, it can be worked out. I pray every day that he'll be returned home," he said.

The Area One police are asking anyone knowing Brown's whereabouts to call the Falmouth police at 876-954-3222.