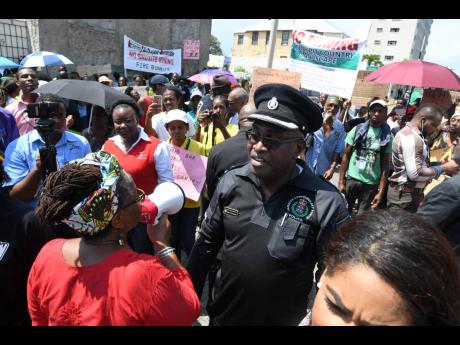 Employers are being urged to implement breastfeeding-friendly workplaces by establishing support facilities such as crèches, breastfeeding rooms and flexible work hours.

The call was made by health minister Dr Christopher Tufton. He said that stakeholders are being engaged to review and improve national laws that support breastfeeding.

Dr Tufton said that the objective of the review is to create a more enabling environment for mothers to breastfeeding in order to improve the health of their babies.

“[This will] also ensure that workers in the informal economy and other vulnerable groups are recognised and protected by national laws,” he said.

National Breastfeeding Week is being observed from September 16 to 22.

The taxi and bus operators who were arrested on Friday, September 13 by members of the Public Safety and Traffic Enforcement Branch (PSTEB) for having more than 1,100 unpaid traffic tickets were fined following their appearances in the Kingston and St Andrew Traffic Court on Monday, September 16.

The taxi operator, 26-year-old Cleveland Dockery of an Arnett Gardens address in Kingston, was charged for over 100 traffic tickets, no motor vehicle insurance coverage, forgery, uttering forged documents, and conspiracy to deceive.

Dockery was convicted and fined $49,000 or seven days’ imprisonment. His licence is suspended for three years for the traffic offences. He is to return to court on September 26 to answer to forgery charges.

The bus operator, 53-year-old Rohan Williams of Crescent Road, Kingston 10, who was arrested for having more than 1,000 unpaid traffic tickets, was convicted and fined $405,000 or 30 days’ imprisonment. His driver’s licence was also suspended for three years.

Some 105 students have benefited from this year’s JMMB Joan Duncan Foundation scholarship programme. The foundation this year awarded $8 million in scholarships and bursaries to students, mainly at the tertiary level.

Patricia Sutherland, chairman of the JMMB Joan Duncan Foundation, said that more than 2,800 students applied for the scholarships.

She said that the foundation made a deliberate decision to provide scholarships to bridge the financial gap and assist individuals to unearth their greatness, in spite of the academic accolades of the applicants.

“We recognised that there is a gap that is not readily being filled, resulting in a significant number of financially challenged students not being able to benefit from the financial assistance available because they are not in the top percentile of their class, although they are average or above-average students,” she said.

100 persons arrested under state of emergency in Clarendon, St Catherine

Some 100 persons have been arrested and charged with varying offences under the state of public emergency that is currently in effect in Clarendon and St Catherine.

“Since implementation of the state of public emergency over the period September 5 to September 11 – the first seven days of the operations – the rates of murders and shootings, collectively, have been reduced by 73 per cent. That is, from 15 murders to four murders when compared to the equivalent period,” Holness said.

The House of Representatives on Tuesday approved a one-month extension of the State of Public Emergency (SOE) in the parishes of Clarendon and St Catherine, until October 19. Holness initially has asked the House for a three-month extension, but the parliamentary opposition shot down the suggestion.

Nearly 950 murders have been recorded in Jamaica between January 1 and September 16.

Prime Minister Andrew Holness said the Government sees the crime situation with grave concern. He said that some 948 murders and 908 incidents of shootings were recorded across all 19 police divisions during the period.

“While there have been notable reductions and some marginal differences in many of these divisions, there are others that have recorded notable increases, therefore overall, the Government sees the crime situation with grave concern,” Holness said in Parliament on Tuesday.