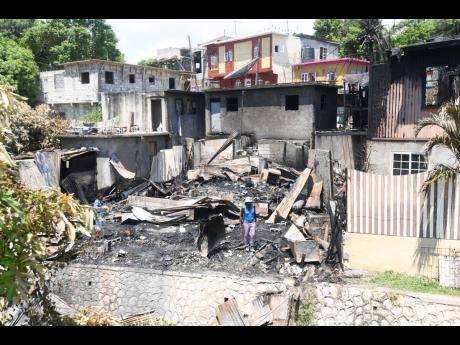 Fire of unknown origin destroyed this dwelling at Air Pipe Lane, near Liguanea, in St Andrew on Sunday night.

Three men have been charged for the murder of 18-year-old Tyreek Sawyers, of Southern Cross Drive, Kingston 17.

Reports from the Elletson Road Police are that Sawyers was standing at his gate when he was pounced upon by the men who shot him multiple times.

It will allow the police to access real-time reports that detail information on all the warrants that have been issued for an individual, placing the police in a better position to target repeat offenders, who have been able to avoid detection and apprehension under the previous system.

"This will signal the seriousness with which we are treating with public order, road safety and traffic law enforcement. Motorists must be held accountable for their actions and the police must impose the appropriate punitive sanctions when necessary," national security minister Dr Horace Chang said.

Jamaica saw a 90 per cent increase in the amount of breadfruit exported, largely to the United States, between 2013 and 2017.

This is according to state minister in the Ministry of Industry, Commerce, Agriculture and Fisheries, Floyd Green.

"We have also seen a 70 per cent rise in the value of the export, again largely to the United States market that takes up approximately 67 per cent of our export of breadfruit," he said.

"The reality is that where the world is moving towards gluten-free items, we have a strategic advantage," added Green as he encouraged farmers and other persons to plant more breadfruit trees.

After being embroiled in scandal for months, Ruel Reid has finally resigned as the Jamaica Labour Party's caretaker for North West St. Ann.

Dr Horace Change, the JLP's general secretary, said Reid tendered his resignation via email on Sunday, September 15, and then by way of a written letter.

Reid was fired as education minister in March by Prime Minister Andrew Holness amid allegations of improprieties in the ministry.

Kim Brown Lawrence, councillor for the Brown's Town division and former St Ann's Bay mayor Ivan Anderson are among those interested in being the JLP's candidate.

The constituency is represented by two-term member of parliament Dr Dayton Campbell.

The Ministry of Culture, Gender, Entertainment and Sport and The University of the West Indies Open Campus have agreed to collaborate in providing training and to engage in areas of research to address prevailing cultural stereotypes associated with sexual harassment.

"The partnership with the UWI Open Campus is designed to increase awareness on the provisions of the anti-sexual harassment legislation, and promote a climate of dignity, respect and tolerance in our workplaces," portfolio minister Olivia Grange said.

Pro Vice Chancellor and Principal of The UWI Open Campus, Dr. Luz Longsworth had offered support to the minister in the areas of training and research to combat the conduct, utterances and attitudes associated with sexual harassment.

Dr. Longsworth indicated that The UWI Open Campus has long recognised "the general lack of knowledge, training and education when it comes to sexual harassment at the workplace."

JCF is Most Outstanding Giving Organisation

The Jamaica Constabulary Force (JCF) has, for the 10th year, copped the United Way of Jamaica's (UWJ) Most Outstanding Employee-Giving Organisation Award.

The JCF received the coveted award, among other prizes, for contributing to the UWJ's work through salary deductions from over 7,000 policemen and women.

The National Police College of Jamaica (NPCJ) was awarded a Gold medal for being adjudged the Most Outstanding Giving Organisation.

The awards and prizes were presented during UWJ's 2019 Nation Builders and Employees Awards ceremony, held recently at the Jamaica Pegasus Hotel in New Kingston.

Woman Inspector Barbara Robinson, who is attached to the NPCJ, received a Gold medal for being the Most Outstanding Employee Giving Coordinator, while Constables Tariq McAllister and Omar Williams were also recognised for being exemplary donors.