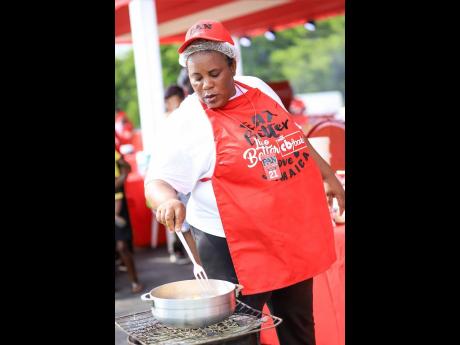 Charmaine Pryce shows off her skills as she competes in the PAN 2019 regional competition. Pryce emerged winner for Hanover and advances to the PAN 2019 Grand Final, which is scheduled for Sunday October 27 at Grizzly’s Plantation in St Ann.

The Jamaica Defence Force began training exercises in and around the Lydford, St Ann yesterday. The activities will last until October 19.

Residents are being advised that there is no need to be alarmed by the presence of the soldiers as the training exercises in their community will not involve any live firing and therefore will pose no danger.

Residents are asked not to interfere with and/or move training aides. In the event that unexploded ordnances or paraphernalia are found, they are asked to report it to the JDF headquarters.

Police Commissioner Major General Antony Anderson said that there will be increased focus on taking habitual traffic offenders before the courts.

Anderson's comment was made at the level of the National Security Council.

Prime Minister Holness directed the ministries of Justice and National Security along with the Attorney General's office coordinate efforts to ensure there is a robust system of traffic enforcement.

At least five drivers who have each accumulated hundreds of unpaid traffic tickets have been locked up in recent weeks. In the latest incident, 39-year-old Dwayne Mitchell of 8 Miles, Bull Bay in St. Andrew was fined $65,000 or 30 days in jail after he was convicted in court. His driver's license was also suspended for six months.

Mitchell was arrested on a warrant after he failed to pay 615 traffic tickets.

A police corporal who was arrested and charged with breaches of the Firearms Act in 2018 has been sentenced to a combined 17 years imprisonment.

Miller was arrested on October 2, 2018 on Myers Lane, Newlands in St. Catherine.

It is reported that police officers attached to the Counter Terrorism and Organized Crime Investigations Branch nabbed Miller during a snap raid about 8:00 p.m in the community. An AK47 rifle, a Taurus 9mm pistol, fifteen 7.62 rounds of ammunition and fifteen 9mm rounds of ammunition were found in a motor car that he was driving.

The sentences are to run concurrently.

State of Emergency remains until January 4, 2020

Persons who live in the St. Andrew South Police Division will spend Christmas under a State of Emergency after both houses of parliament voted to extend the extreme security measure in the area until January 4, 2020

The State of Emergency was imposed on July 7 . Senator Kamina Johnson Smith, speaking in the Senate, said that 12 firearms, 120 ammunitions and eight magazines have been seized in the division since the measure was declared. Addittionally, she said that 11 persons have been arrested and charged.

However, Senator Johnson Smith pointed out that despite the reduction in murders and shooting achieved since the start of the SOE, the numbers remain high.

"Since the implementation of the SOE over the comparative period of the July 7 to September 28 (a period of 84 days), when compared to the equivalent period of April 14 to July 6, murders in the St. Andrew South Police division have reduced by 58 per cent... from 53 to 22," she said.

She further noted that shootings have reduced by 47 per cent, from 51 to 27.

Arguing that farmers in the districts of Enfield, Belfield, Richmond and Rock River in St Mary have been badly affected by the Frosty Pod disease, Dr. Shane Alexis says it is time that the government steps forward and help cocoa farmers.

"The disease has severely reduced and, in some cases, completely destroyed the yield of our internationally-acclaimed fine flavour cocoa," said Dr Alexis, the People's National Party's caretaker for South East St Mary.

He said the Government's initial response, administered by the Quarantine Division of the Ministry of Agriculture to prune the affected trees, has now left many cocoa farmers with trees that cannot produce fruit. As a result, now, they cannot earn an income from their cocoa fields.