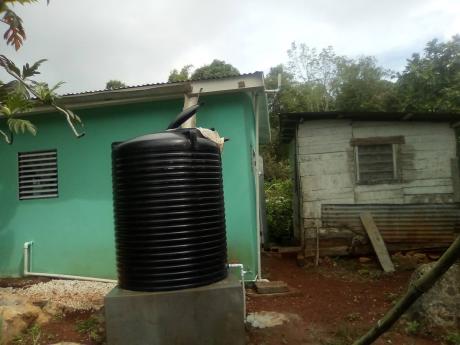 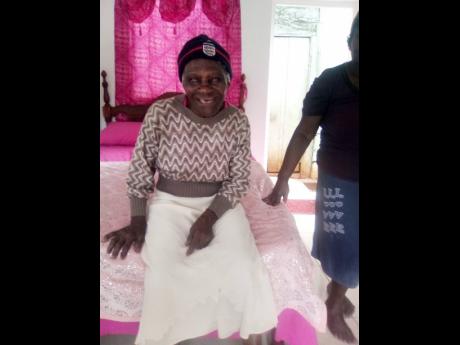 Ninety-five-year-old Nora Johnson was a picture of contentment as she sat inside her new house that she was given on Monday under the Ministry of Local Government and Community Development's indigent programme.

Ramone Fisher, deputy superintendent of roads and works at the St Catherine Municipal Corporation (SCMC), revealed that the unit was built at a cost of J$1.8 million.

Johnson was delighted to receive the house as she was living in desperate conditions before the intervention.

Johnson said that she lived in that house for 15 years, meaning she had to sweat out a couple of hurricanes during that time.

The structure, made of withered board and rusted zinc, was less than ideal.

"I am thankful for this house; it is better than where I was living, which used to get wet whenever it rained. And I didn't have no proper sleeping or bathing place. But now mi feel boasy and good," she smiled.

During her working years, Johnson was a labourer and has lived in Mendez for decades, in another section of the district.

She admitted that she has children, but wouldn't go into details about why she lived on her own.

McKenzie said that he was very pleased to hand over the house to 'Miss Nora', underlining that "she deserves to be comfortable".

He said that there are 14,000 persons on the country's Poor Relief Department records, and said that St Catherine would benefit from two houses; Miss Nora's was the first.

It was revealed that a programme has been set up for the officials of the Poor Relief Department islandwide to assist the registered poor with repairs to their houses as the needs arise.

McKenzie implored Scott, to ensure that the staff registered the targeted persons, the needy, to get

the benefits of the programme.

"I am asking you to make sure that they (the needy) are registered to get help. I don't want no young people to come take over; it must be properly monitored by the staff," McKenzie said.

Meanwhile, Scott endorsed the efforts of the Poor Relief team and implored the minister to do more.

"We are thankful for this effort and it takes a minister that has local government at heart to make these meaningful contribution to persons like Miss Johnson, but we need more," Scott said.

Fisher noted that the next project would be erected at Crescent district.