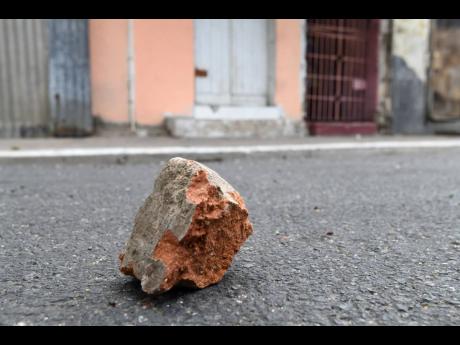 A public declaration that a blood-soaked sanitary napkin was taken from his mouth was too much for Lance Ewers.

In the Kingston and St Andrew Parish Court yesterday, Ewers, who was charged with assault occasioning bodily harm and assault at common-law, explained that his friend's babymother told persons the story when they were having a disagreement.

The court heard that Ewers threw stones at the complainant hitting her on the back of her leg and used a kitchen knife and wiped it across her chest.

He pleaded guilty to the stone throwing but insisted he did not pull any weapon on the complainant.

"Her babyfada and I are good friend and he borrowed my X-box. Three days later I said to him that I am coming for the game and I went to the house. When I went there she a give me bare attitude ... she walk go out a road but she never know I was behind her and me hear she a talk bout me a spread rumours on her," Ewers told the court.

It was during the argument that she made the sanitary napkin comment.

Ewers said when these insults were being hurled at him, he had to be consoled by residents who heard and saw what was taking place.

"People a hug me because a weh she a seh to me, but me and har did have a stone war," he said.

After hearing both sides of the story, presiding judge Lori-Ann Cole-Montague advised Ewers that men should learn to walk away from issues even if they are in a position to defend themselves.

"... sometimes you show your manhood by walking away, so that is what you should have done," she said.

Ewers, who is currently unemployed, asked for time to make payment in two instalments. The judge obliged, stating that the first payment is due November 15.