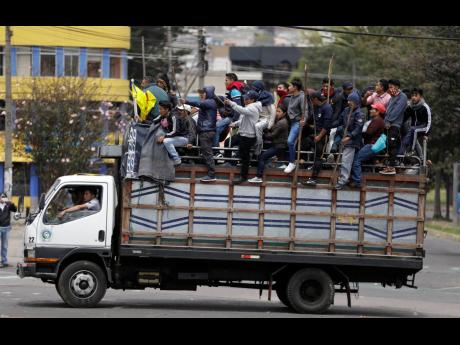 Indigenous anti-government demonstrators arrive to join other indigenous groups to protest against President Lenin Moreno and his economic policies in Quito, Ecuador, yesterday. Ecuador has endured days of popular upheaval since Moreno scrapped fuel price subsidies, a step that set off protests and clashes across the South American country.

The National Water Commission (NWC) has lifted a prohibition order that made it unlawful for persons to water their gardens, lawns, grounds, and farms or wash vehicles using a hose.

The order was imposed in May because of drought conditions. However, as a result of increased storage levels resulting from rainfall in recent weeks, the NWC says there is no need to keep the prohibition order in place.

“With recent rainfall, the inflows to NWC sources that had been struggling under several months of below-normal rainfall, especially in eastern and southern parishes, have shown measureable improvement,” the NWC said.

Despite rescinding the order, the NWC said that customers are encouraged to conserve water as part of their normal practice and to avoid the need for the NWC to revert to water-restriction measures.

Garvey Maceo gets computers from Jamalco

Students at Garvey Maceo High School in Clarendon are set to benefit from 10 desktop computers that were donated by Jamalco. The computers, which are valued at some $1.1 million, were officially handed over at a ceremony held at the institution recently.

Erica Ewbanks, the school’s principal, said that the computers will assist the students in their preparation for the new exam formats being rolled out by the Caribbean Examinations Council (CXC).

“CXC is now moving away from T-squares and drawing sheets to AutoCAD, and the computers will aid in preparing the students for the new exam format. It really warms our heart, as a small school, to be identified with a big brand,” she said.

Managing director at Jamalco Austin Mooney said that Jamalco and Garvey Maceo High have had a long and fruitful relationship.

“We want the students in our operational areas to get a world-class education, and as such, we are committed to ensuring that the schools in our areas are equipped with the basic technical resources needed to supplement their traditional teaching needs,” Mooney said.

Health and Wellness Minister Dr Christopher Tufton has said that the time has come to rein in illicit trade in tobacco products as it represents a serious public-health threat.

“The illicit trade in tobacco products increases the accessibility and affordability of tobacco products, thus fuelling the tobacco epidemic, which kills some eight million people each year. More than seven million are the result of direct tobacco use, and more than one million the result of non-smokers being exposed to second-hand smoke,” Tufton said.

He said that illicit trade also undermines tobacco-control policies and causes substantial losses to government revenues while contributing to the funding of transnational criminal activities.

“We must rein in the illicit trade, and the protocol provides us with a tool to do that,” Tufton said.

He was speaking in Montego Bay on Monday at a multisectoral workshop for World Health Organization Framework Convention on Tobacco Control parties in the Caribbean to promote the Protocol to Eliminate Illicit Trade in Tobacco Products.

Public warned to brace for delays in getting police records

The Criminal Records Office (CRO) has reopened for business at a new location. The office is now located at 6-8 Orange Street, downtown Kingston.

Persons, however, will not be able to access the usual next-day/24-hour service as this system has been suspended until further notice.

Persons applying for a police record may only apply for five-day or 21-day service, but they should brace for delays as the police say that there is a backlog.

The CRO was temporarily closed to facilitate relocation following concerns over air quality at the 34 Duke Street facility.

Oral Clarke, the JUTC bus driver who was implicated in the stabbing death of Akeeno Britton, a taxi operator of Ambrook Lane, Kingston 10, has been charged with murder.

Clarke, 39, allegedly stabbed Britton to death on September 24. He later turned himself in to the police.

The incident led to a near shutdown of the public transport system in sections of the Corporate Area as taxi operators withdrew their services to protest the killing. JUTC drivers also stayed off the job, expressing fear of reprisals, especially owing to the fact that one of their colleagues, Mikkel Donaldson, was murdered hours after the killing of Britton.