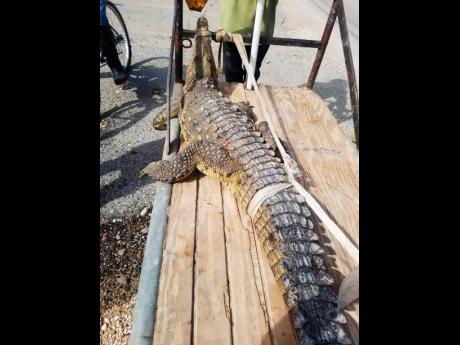 Photo By Leon Jackson This crocodile was captured in the mangroves located near Foreshore Road in Trelawny yesterday.

Two crocodiles have been captured in two days in the Foreshore Road area of Falmouth, Trelawny.

The first catch took place on Tuesday and the other yesterday.

"Yesterday, a co-worker of mine was walking in the mangrove when he was attacked. He was bitten in several places on his thigh. He escaped serious injury because he knows how to operate around crocodiles," Donald Roach told THE STAR.

Antoinette Brown of the National Environment and Planning Agency told THE STAR that a report about the capture of the two crocodiles is expected from the facility to which they were reportedly taken.

Crocodiles are among Jamaica's many endangered animal species and are protected under law. It is an offence under the Wild Life Protection Act to possess, hunt, kill, capture or willfully molest crocodiles.

Individuals found guilty of the offence may be charged a maximum fine of $100,000 or face one year's imprisonment.