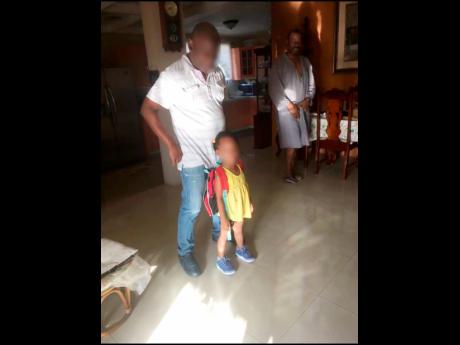 Screen grab of the video shows Brown and his daughter (left) with the ‘ghost’ in the background.

For the past five years, John Brown* has lived comfortably at a premises he rented in Edgewater, Portmore, St Catherine; but he now believes that his living space has been invaded by the robe-wearing ghost of a Rastaman.

The duppy even photobombed a set of photographs that Brown took with his daughter last year.

THE STAR obtained a short video of father and daughter smiling for the camera when a 'man' wearing a grey robe and a pair of black slippers walked by slowly.

A zoomed still shot of the video showed that the man's lips were sealed shut and his eyes were closed.

"My daughter was having shorts day at her school so I beg the other tenant that live at the house to take a few pictures of us so me could send to mi babymother a farrin. The picture dem come out alright but the girl never understand the phone so instead of turning on the camera, at first she had began to video tape first; so that's how the video make," he said.

Brown said he had no idea he was living with the 'Rasta' duppy until he was deleting some pictures from his phone earlier this week.

"Earlier this week mi put in a new SD card so mi start go through some pictures in my phone to see what was worth deleting and that's when I saw the video. I look at it about three times and I then call one of my friends and ask him to tell mi what him see and we see the same man a walk," he said.

He is adamant that he will not return home.

"Mi did feel fraid at first but then mi remember how long the pictures and mi say to mi self say da man deh nuh really wa trouble mi because a over one year and nine months we a share the same house and him nuh trouble mi. Him all eat out a mi food cuz one a the picture show him a bend over mi food," said Brown.

He said he doesn't know where the ghost came from and will only go back to the house with "church people" to get his things.

"Mi a carry dem because mi nuh want him to follow mi where mi a go. A the first mi ever a have a experience like this and as a matter of fact, mi never believe inna duppy until now," he said.

Other photos showed the duppy, whose dreadlocks were sleeked back in a pony tail, bending over the stove.

"For the past couple of months mi say mi a try get rid of mi belly so a bare fish mi mostly cook. So mi all a wonder if a mi a feed him why him a stay cuz in a one the picture him bend over mi stove like him wa go inna the pot and Rasta man love fish," he said.

Brown is even wondering if the apparition caused his babymother's illness recently.

"She fly down come stay for a while and she sick out from she reach. A bare vomit and running belly she have until mi a wonder a wah dis. Mi a wonder if a because she did a eat the food that the rasta duppy did a eat," he said.