Kingston man gets five ‘jackets’ from one woman 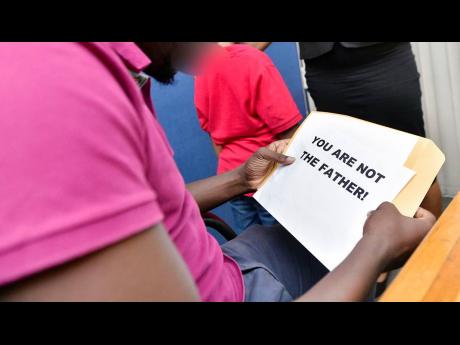 A Kingston man recently found out that five of his six children are not his after babymother, who he plans to marry soon, confessed to him.

The man, whose identity is being withheld to protect the children involved, said his common-law-wife suggested that DNA tests be done to determine the paternity of the six children. In all but one instance, the result was crushing: You are not the father!

The man told THE STAR that his common-law-wife made some mistakes and he has forgiven her.

"Me live wid me baby mada fi 20-odd years now and me find out recently, that five out of six kids is not mine. But I am at peace still. She said she made a mistake and I can not kill her. Mi love fi har more dan how me did vex and notice me seh did. Me leggo dat now. We a big people and people make mistakes," he said.

In April, THE STAR reported that a company that offers DNA testing in Jamaica disclosed that in 70 per cent of their tests the men who were named as fathers had nothing to do with the paternity of the children. In other words, seven in every 10 paternity tests conducted by the lab showed that the men were not the fathers.

Meanwhile, this Kingston man, who is being mocked in his community, said he has nothing but love for his woman and six children.

"Me love all a dem di same way. From di mada, straight down to mi six yutes...Me love dem to mi grave. A dem a me only fren. Me know dem from dem young til now. Me neva mistreat dem, me tek care a dem and dat nah change," the man said.

He told THE STAR that he intends to marry his babymother some time in the future.

"A wah tell yuh seh she think me did a go throw har out, but I would never do that. Nobody caa tell me otherwise. She come to me some weeks a go and seh she waah me do a DNA test...She tell me seh she cheat and she nuh sure if dem a mine. Me respect dat she come to me. Me coulda dead and nuh know, yuh see weh me a seh?," the man said.

Dis a my life

"Dis a my life and a me mek my decisions. Me sister a foreign call me and a try style me, me jus mek she know she neva a send nothing fi none a my yute dem yet, suh she caa too jump in a dis. In a times like dis, yuh know who a family and who jus get yuh blood fi fass inaa yuh business. And a kill we a go kill dem off when we married."

The man told THE STAR that he too has been unfaithful at one point.

"I did have nuff outside relationship back then too. I coulda breed somebody, a suh dem ting deh go. If a dat was the case and she find out, me woulda wah she love me same way, care fi me same way, respect me same way. Some people weh live near me yard find out and dem galang di worse way. Tek me business and gone a road a mek joke. Dem nuh know love, dem young. Dem in love wid dem hand miggle and in love wid begging and people business," he said.