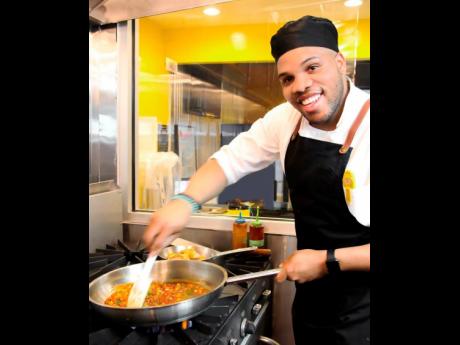 Andrane Cummings cooks up another dish. 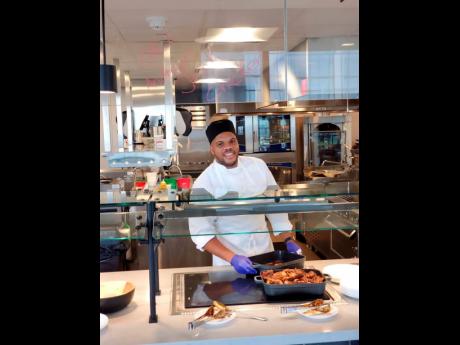 A ndrane Cummings is coming from what his friends describe as ‘humble beginnings’. Growing up in Ewarton, St Catherine, Cummings said that he is the eldest of three boys.

His mother was a single parent, and, as such, life was not the easiest; but he decided that he was going to make the best out of what he had.

“I am coming from a community where a lot of the youths there did not finish high school or even get the chance to go to college and I decided that was not going to be me because I have younger siblings looking up to me,” he said.

The St Jago High School past student said he fell in love with cooking and aspired to be a culinary teacher after he got the opportunity to teach.

He admitted that he did not finish sixth form, but he worked and sent himself to the Heart Trust NTA, where he achieved level two certification in commercial food preparation.

He later spent some years at the Shortwood Teachers’ College before he went to the United States where he now resides.

“I did food and nutrition in high school. I always had a passion for food and hospitality and all that. When I stopped going to high school, I did a little odd jobs where I was teaching food preparation at YWCA (Young Women’s Christian Association). That’s when I got interested in teaching and started to attend Shortwood Teachers’ College where I was doing a bachelor’s in secondary education, where I wanted to teach home economics,” he said.

That dream did not materialise but something else sparked in the now 32-year-old and he got the opportunity to work in the US where he has been showcasing his culinary skills, recently landing him a high-profile job.

“When I got the opportunity to come to the United States, I decided that I was going to be a chef because during the work and travel days that is what I did. When I came here, The Door restaurant in New York was the first major breakthrough for me. I just got transferred to (being) one of the head chefs at The World Trade Centre,” he said.

He also has hopes of launching his own business; he has started the process by having a catering company on the side.

He said that this is an exciting moment for him and it shows that people can become anything they want if they put in the work and put their minds to it.

Cummings told THE STAR that the support from his family has been tremendous and he often uses his journey to encourage his younger siblings who are also doing well.