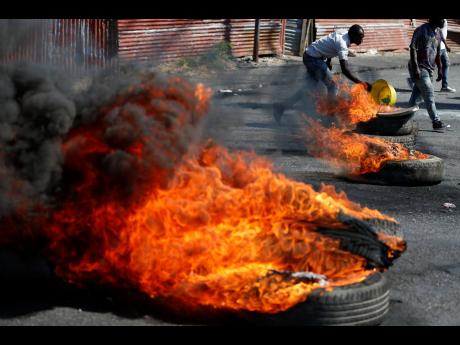 A man adds debris to a barricade of burning tyres set by protesters in the Delmar area of Port-au-Prince, Haiti, on Monday. Haiti’s embattled president faced a fifth week of protests as roadblocks went up across the country after opposition leaders said they would not back down on their call for Jovenel Moïse to resign.

Former Prime Minister P.J. Patterson will undergo surgery today. Patterson, 84, was injured in a motor vehicle accident at his home in St Andrew. He suffered injuries to his right knee and right hip, but doctors said that he is expected to make a full recovery with the appropriate medical treatment.

He is currently a patient at the Tony Thwaites Wing of the University Hospital of the West Indies (UHWI), where he was assessed by a team led by Dr Kenneth Vaughn, a consultant orthopaedic surgeon.

Agriculture Minister Audley Shaw says he expects an increase in the yield of cocoa for the fall crop, in areas where the Frosty Pod Rot disease management programme has been implemented.

“We are already witnessing an improved performance in the sector. For the first week of cocoa collection for the new crop year, which began on October 1, one fermentary has seen 400 boxes of wet cocoa beans being delivered by farmers,” he said.

The minister was speaking at a recent media briefing on the management of the disease yesterday.

FSC tells consumers to be wary of ‘unlimited’ phone plans

Consumers are being warned to be particularly vigilant when the word ‘unlimited’ is used in advertisements; and are encouraged to obtain full information from their telecommunications service providers on the details of calling plans prior to purchase.

The complaints from the public concern the unlimited calling, text and data plans being advertised by telecommunications service providers.

According to the FTC, consumers are induced by the advertised offerings of unlimited as they believe that upon purchase, they will gain the use of unrestricted calling for the duration of their plan.

Police who were conducting a robbery investigation in St Ann recovered a firearm and several rounds of ammunition during a search of a motor vehicle on Monday.

One man, Ricky Samms, 41, of Upton, St Ann, was subsequently arrested and charged for illegal possession of firearm and ammunition.

In the meantime, detectives assigned to the Kingston East Division seized two magazines loaded with 14 rounds of ammunition at the Norman Manley International Airport on Sunday. One man, Kyle Wieganol, 22, a salesman of Feopor, Indiana, in the United States of America was charged in connection to the seizure.

Reports are that about 11:10 a.m., baggage at the area for outgoing flights was searched and the magazines were detected.

Derrick Hall of Logwood district in Westmoreland, died from injuries he sustained in an accident on the Lindos Hill main road in the parish on Monday.

Reports from the Whithorn police are that about 6:17 p.m., Hall was walking along the roadway when he was hit by a Toyota Coaster bus. The police were summoned and he was taken to hospital where he was pronounced dead.

The driver of the Coaster bus has been warned for prosecution.

The police are yet to make a breakthrough in the murder of attorney-at-Law Sashakay Fairclough. The young lawyer was murdered in her community of Brook Green, St Ann, on September 13.

Reports are that about 5:30 p.m., Fairclough was driving a motor car on the Brook Green main road, when armed men travelling in the opposite direction drove up beside Fairclough’s vehicle and opened gunfire; she was shot multiple times.

Detectives assigned to the Major Investigations Division (MID) yesterday appealed for anyone with information or witnesses in the murder to contact them.

Hundreds of children from St Mary have benefited from free eye examinations at vision clinics staged by the Issa Trust Foundation. The clinics, held in collaboration with the Lions Club of Michigan and the Vision Mission Team of Altoona, Iowa, took place at the Oracabessa Church of God from October 7 to 9.

Diane Pollard, president and CEO of the foundation, told the JIS News that 887 children received eye checks and 172 pairs of glasses were dispensed over the three days.

She said the mission team was comprised of four optometrists, a licensed medical doctor, a licensed optician and 15 volunteer technicians “Who provided comprehensive eye exams and fitted the children with glasses free of charge”.

In addition to the students examined, a clinic was held at Couples Swept Away for staff of that property and Couples Negril, where 329 employees were seen and 220 received glasses.