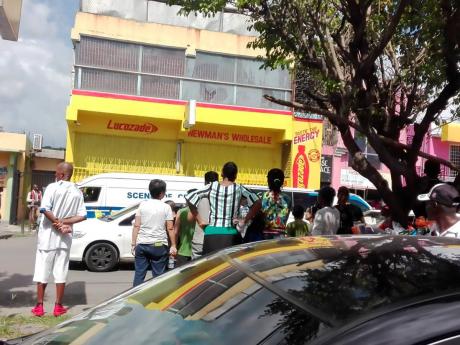 Onlookers view the outside of the wholesale.

Persons in Clarendon's capital May Pen were in shock yesterday as news surfaced that the body of 51-year-old Chinese businessman and owner of Newman's Wholesale, Wiyong Liu, was discovered at the Guinep Tree, Manchester Avenue location.

Investigators on the scene said the body was discovered about 8 .a.m., but added that it was too soon to make further comments pending further investigations.

As the crowd of onlookers thickened at the wholesale, rumours began spreading that the businessman's body had been burnt and drenched in alcohol.

Some residents of the Clarendon capital are sharing sentiments that it is high time Chinese nationals cease doing business in the country, as this is doing them more harm than good.

Some Chinese nationals who were on the scene wept openly but declined to comment on the incident.

Newman's Wholesale stands adjacent to a Chinese-owned supermarket where a brazen daylight robbery took place at in May.

Councillor for May Pen, Kenneth Davis, has described Liu's death as unfortunate, adding that any incident of such is unacceptable.