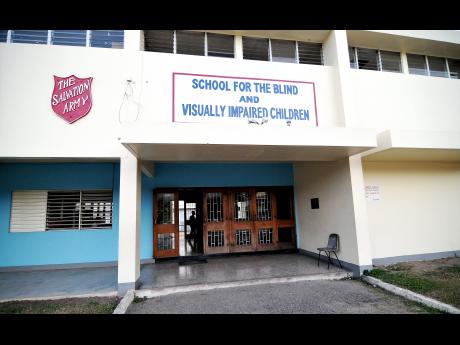 The Salvation Army School for the Blind and Visually-Impaired.

The Education Ministry says it has been in dialogue with the Salvation Army to ensure that the charity group does not shut down the dorms of the organisation's School for the Blind and Visually-Impaired in St Andrew.

The ministry said that while the Salvation Army has not advised it of any intention to close the boarding facility, closure would result in displacement of students who would not be able to access the school, since they do not reside in the Corporate Area.

Similarly, Dr Floyd Morris, the opposition spokesman on social services, said “If this facility is closed, the management would be sending 65 children with disabilities to rural Jamaica to face a future of poverty.”

The Salvation Army School for the Blind and Visually-Impaired is the only school for the blind and visually impaired in the island. It caters to children from the early childhood to the secondary level, many of whom are from parishes outside of Kingston.

The boarding facilities were closed over the recent mid-term school break, prompting fears that the Salvation Army could removing the lodging facilities altogether.

The dormitory has since re-opened, and the education ministry said that more than 90 per cent of the students are now back in boarding.