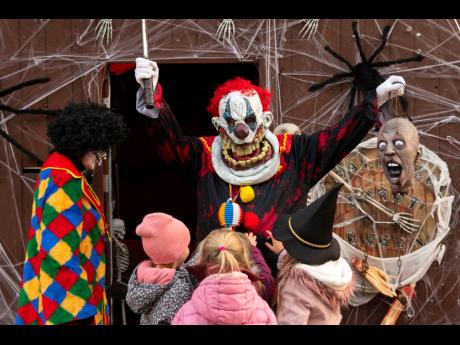 Mario Leicht (centre) and his wife wear costumes as horror clowns at their house, decorated for Halloween, in Walschleben near Erfurt, Germany, last Thursday. The whole house facade and the front garden are decorated with dolls, spiders, and skulls and inside with mini-ghosts, vampires, skeletons, zombies and almost 50 spiders. He has decorated the house for Halloween every year since 2011.

"We can grow red peas profitably right here in Jamaica. We import most of our red peas from a neighbouring CARICOM territory, and my response is that if they can grow it there, we can grow it here," de facto agriculture minister JC Hutchinson said.

"This initiative that you have embarked on to resuscitate and increase production of red peas is therefore to be lauded, and you have the full support of the ministry to strengthen your prospects in achieving your desired goal," Hutchinson said.

Driver locked up after truck kills boy at school

The driver of the truck that was involved in the accident that claimed the life of seven-year-old Benjamin Blair on Monday, October 28, is now in police custody.

Reports from the Elletson Road police are that on Friday, November 1, at about 6:30 p.m., the suspect, who had initially fled the scene of the accident, turned himself in to the police.

His identity is being withheld to facilitate the investigation process.

Justice Minister Delroy Chuck has said that the justice centres that are being established across the island will assist with the ongoing case backlog reduction strategy.

"It was important that we look at the reduction in the backlog of cases in the courts, and this is happening at a very significant speed," he said.

The St Andrew Justice Centre was officially opened on Friday, bringing the total number of parish justice centres to eight.

Chuck said the centres will be equipped to handle matters related to restorative justice and child diversion, as well as dispute resolution, among a wide range of other justice-related issues.

"My goal is to have all 14 parish justice centres operational by December 2020," he added.

Bustamante Hospital yet to get $100m raised by Shaggy

Almost two years after the successful 2018 staging of the biennial Shaggy and Friends concert, the Bustamante Hospital for Children is still anxiously waiting to receive the benefits from the charity event, which reportedly raised $100 million.

The concert was hosted by international recording artiste Orville 'Shaggy' Burrell on January 6, 2018, with support from the Shaggy Make a Difference Foundation, which is co-directed by his wife, Rebecca Burrell.

The Sunday Gleaner reported the hospital's chairman, Kenneth Benjamin, as saying that neither the Intensive Care Unit beds that were to be purchased from the proceeds of the charity event nor the money raised had been handed over.

Small said that it is important that the business community works closely with the police to safeguard their operations against criminal activity.

"Some of the things that we want to encourage the business community to do is to be on the alert at all times. We want you to practise target hardening. We want you to put up good closed-circuit television cameras. I think sometimes, when we go to the scene [of an incident], what hampers our investigators is that the cameras are there but the quality of the images is just not good enough," he said.

Small was speaking at a meeting of the St Ann Chamber of Commerce at the Port Rhoades Complex in Discovery Bay last Thursday.

The senior superintendent said that the St Ann police have been maintaining a strong presence in major towns.

"We try to dominate the areas where we have issues. As far as the policing district is concerned, Ocho Rios is the main area of activities. Out of 235 majors crimes so far this year, Ocho Rios is featuring with 94, followed by St Ann's Bay, 48, and Brown's Town, 23," he said.