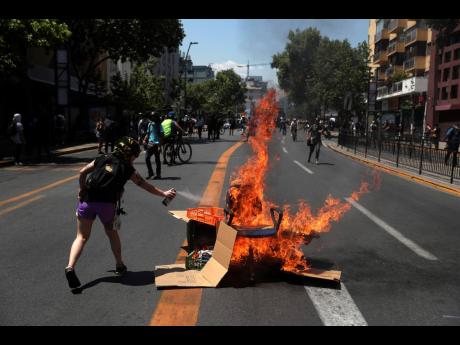 An anti-government demonstrator fuels a burning barricade with aerosol spray during a protest, in Santiago, Chile, yesterday. Chile’s president is sending a bill to Congress that would raise the minimum salary, one of a series of measures to try to contain nearly three weeks of anti-government protests.

Twenty-seven-year-old Davian Jarrett, otherwise called 'Fox', labourer of Bounty Hall in Trelawny, is scheduled to appear before the Western Regioal Gun Court to answer to the charges of illegal possession of firearm and ammunition.

Reports from the Wakefield Police are that about 11:45 p.m., on Tuesday, November 5, lawmen were on patrol along the Bounty Hall main road when they observed Jarrett acting in a manner that aroused their suspicion.

He was accosted, searched, and a Taurus 9mm pistol along with a magazine containing twelve 9mm rounds of ammunition was removed from his waistband.

A court date will be announced later.

Westmoreland communities to be without water

The National Water Commission (NWC) is advising that it will be carrying out emergency maintenance work at the Bulstrode Treatment Plant in Westmoreland, today between 8 a.m. and 7 p.m.

As a result, customers served by this facility will be without piped water.

Cabinet has approved contracts totalling J$1.7 billion for the provision of security and related services at health facilities managed by the South East Regional Health Authority (SERHA), for a period of three years.

Minister without Portfolio with responsibility for Information, Karl Samuda, advised that Modern Investigations and Security Company Limited has been awarded a $436.6 million contract to provide services at the Bustamante Hospital for Children, National Chest Hospital, Hope Institute and the Sir John Golding Rehabilitation Centre.

Additionally, Marksman Limited has been contracted to provide security and related services at the Spanish Town Hospital, St Catherine Health Department Offices, Linstead Hospital and selected health centres across St Catherine at a cost of $382.8 million.

Neita is calling on the Government to take steps immediately to address the situation and prevent the current health crisis from worsening.

Neita, member of parliament for North Central St Catherine and PNP deputy general secretary, said her office has been inundated with islandwide complaints and concerns regarding the state of garbage collection.

Remembrance Day, also known as Armistice Day or Poppy Day, is observed on the second Sunday in November to commemorate the end of World Wars I and II, and to recognise the sacrifices of those who died in the wars.

Two minutes of silence will be observed at the same time (11 a.m.) in militaries across the world.

More than 10,000 Jamaicans volunteered for World War One alone and thousands died across both conflicts.

This year's Remembrance Day will also involve a church service at the Garrison Church in Up Park Camp.