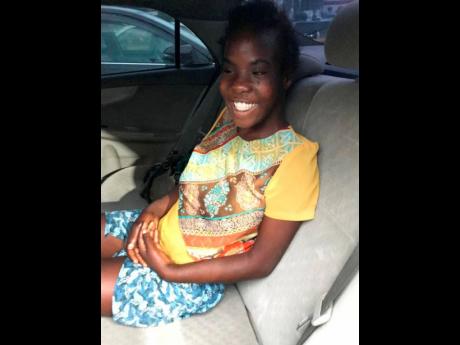 When Vanetta Watson invited her 18-year-old niece Sanieka Stone to come and live with her, she knew that she had to make some adjustments as the teen is deaf and unable to speak.

Watson would always leave Sanieka at home in St Elizabeth daily for work and would always come home to find her in high spirits.

However, on October 21, Watson came home to an empty house.

Frantic and scared, she quickly reached out to family members hoping that Sanieka would have been with them; she was not.

After exhausting all mediums, she reported her niece missing, and on October 25, she posted a current photo of Sanieka on social media.

Someone reached out to Watson and told her they had seen Sanieka in Mandeville.

Soon Sanieka was found and taken to the police. Unable to say her name or whereabouts, she was taken to a hospital where she and Watson were reunited.

Watson told THE CENTRAL STAR that Sanieka was traumatised.

"She trod the street for days, looking, crying and reaching out to people for help. I shared it on Facebook and every hint I got, I explored. I did not even know where in Mandeville she was. Then, finally, the final call I got was a blessing. The person described her in detail and directed me to where I could locate her," she said. "When she saw me, she just broke down in tears. I comforted her with hugs and kisses and I tried to ensure her that she was OK now."

Watson said that based on what Sanieka told her, she has a theory as to how the teen ended up in Mandeville but was tight-lipped about it.

She instead focused on the fact that her niece was back home and safe. She took to Facebook to express her gratitude to everyone who helped her in locating her niece.

"Guys, I couldn't have done this without you, words can't express how thankful and relieved I am right now," she posted.