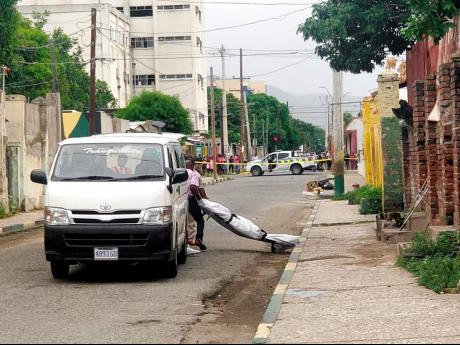 Workers from the House of Tranquility Funeral Home prepare to carry away the body of Delroy Nathan, who was shot and killed yesterday along North Street, Kingston.

A one-legged man, who lives along North Street, was yesterday gunned down by unknown assailants with 28 spent shells being recovered from the scene.

Reports are that the man, identified as Delroy Nathan, 62, was sitting outside his home at 24 North Street around 8:30 a.m. when two men approached him and opened fire hitting him several times.

He was pronounced dead at the scene.

A relative who was on the scene told THE STAR that she was at work when she got the call.

Similar sentiments were expressed by residents who expressed shock at what they saw.

“Mi nuh too long pass yah so with me pickney dem a go school and mi just reach right out deh so when mi get the news,” the resident said.

An eye witness alleged that shortly after passing Nathan, he saw a black Nissan Note behind them. One person came out of the car a few metres from Nathan, while the car continued and stopped at the intersection of Church and North streets.

“The two men came from two different directions. The second one came out from the car when it stopped at Church Street and North Street and left the door open. They pulled their guns and started to shoot him. They all ran to the car and it drove away,” the eye witness said.

According to another resident, Nathan and his friend were at the very same spot four years ago, when the friend was shot and killed. Nathan, however, escaped with only a graze.

“Mi caah figet the day. It was the 27th of September, his one-hand friend got shot and killed at the same place and he got grazed. “Jah Jah, him not even a bleed so it look like everything lodge,” the woman recounted

A 28 spent shell them a pick up. Jesus Christ, mi a go inna church,” another exclaimed.

No motive has been established for the murder.