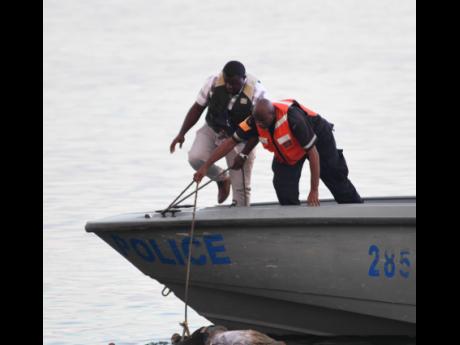 Marine police retrieve the unidentified body from the Kingston Harbour in the vicinity of Flag Circle, off Port Royal Street. According to the Kingston Central police, they were alerted about the body at 3:45 yesterday afternoon.

The fear of being bitten and or eaten by crocodiles delayed the retrieval of an unidentified body that was seen floating under a bridge near Port Royal Street in downtown Kingston yesterday.

Residents told THE WEEKEND STAR that the body was spotted around 1:30 p.m. and the police were alerted.

When the news team arrived on the scene, firefighters and police stated that they were unable to retrieve the body as it was located in an area frequented by crocodiles.

"The water is dirty and on top of that, the residents said that crocodiles may be in the water. What we need is a long wire so we can hook the person and take him out," one firefighter said.

While the firefighters tried to retrieve the body, residents urged them to be vigilant as crocodiles are known to sneak up on persons in the water.

"A right yah so dem always deh. A dem second home this. Nuh tek it so easy, the water deep ya suh, so unuh nah go see them," a resident cautioned.

The Marine police, who were also on hand, were unable to remove the body from its location and therefore had to wait on the tide to push the body further out to sea, where it was retrieved.

The body was then taken to the morgue where an autopsy will be done.