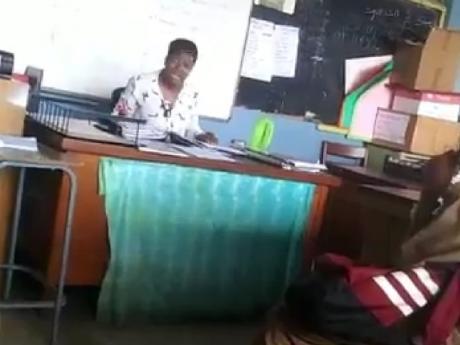 This screen grab shows the Pembroke Hall High School teacher in a rage as she threatened a student with violence.

A female teacher at Pembroke Hall High School in St Andrew has found herself in hot water after she threatened to, among other things, "murder" one of her students.

The shocking outbursts from the teacher came after the student, a male, complained that lies were being told at him. However, in doing so, he raised his voice as he spoke to the teacher. She was not amused.

"We yuh a shout after me fah, me look like yuh mumma?" she asked.

The boy then asked why the teacher was being told about his mother. At was it this point that the venom spewed from the teacher's mouth.

"Nuh baddy tell yuh bout yuh mother?," asked the teacher as she suggested that the student was handicapped and senseless.

"Were you told about your mother?"

The boy could hardly get in a word as the teacher went about demonstrating that she may be unfit for the job.

She chased the child out of the classroom, telling him: “First of all mi mash up pickney head in here.”

The boy, on leaving the classroom told the teacher that she was threatening him.

"That's a promise! Go tell the police that," she replied.

The school's principal, The Reverend Claude Ellis, denounced the teacher’s behaviour saying an immediate probe has been launched. He said the school board chairman and the acting chief education officer have also been advised about the incident.

“We will handle the matter,” Ellis sought to assure, adding that once statements are collected, the matter will be turned over to the board for action to be taken.