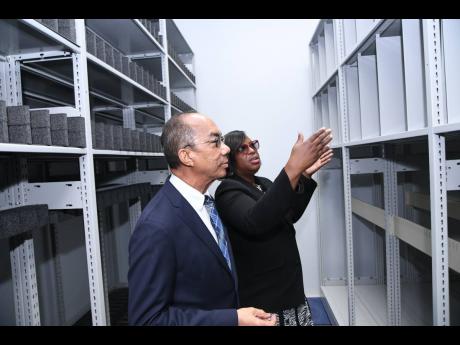 Judith Mowatt, executive director of the Institute of Forensic Science and Legal Medicine, gives National Security Minister Dr Horace Chang a tour of the facility on Hope Boulevard in Kingston on Wednesday.

The investigative capabilities of the Jamaican police has been strengthened with the expansion of the Institute of Forensic Science and Legal Medicine, in Kingston.

A two-storey annex has been built at the institute at a cost of $300 million.

It boasts closed-circuit televisions (CCTVs), a training/conference room, library, access control, and fire suppression, among other key features. It will also house the national DNA Database.

Following a tour of the building this week, National Security Minister Dr Horace Chang said by providing the police with this cutting-edge facility, which has been outfitted with top-of-the-line equipment, "We are, in fact, taking Jamaica's policing into the 21st century".

He said that "We are on our way to building the best equipped and most efficient forensic institute in the Caribbean".

"We are ensuring that our criminal investigative and prosecutorial capabilities are at their best as we work to overhaul the criminal justice system," he said.

Chang advised that the first floor of the new structure is now occupied, while the ground floor will be commissioned into use by January 2020.