Man murdered minutes after getting bail 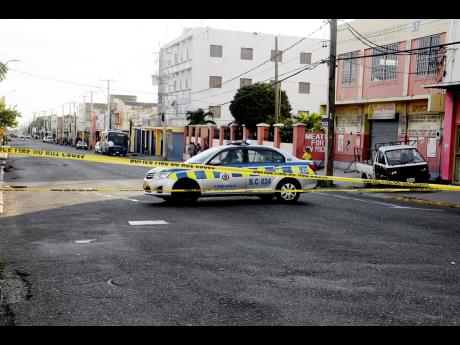 An area on Slipe Road is cordoned off after a man was shot to death.

Less than 10 minutes after he was given bail for a gun-related charge, Dishane Dixon was killed as he and his mother made their way home to celebrate his freedom.

Dixon’s mother, Sheron Duffus, told THE STAR that she received a call from her son shortly after 2 p.m, informing her that he was finally about to “touch road”. That celebration was short-lived as he had barely made it into the vehicle with his mother, when gunmen opened fire, hitting him four times.

“Him just get bail and him call me and seh mi fi come for him and mi go pick him up. When mi reach yah so (Slipe Road), a taxi man stop right in front a me and then mi hear, ‘boom’, and right after that me hear, ‘bow, bow’. Four shot him get,” she cried.

The mother of seven told our news team that she was quite shaken up by the incident.

Even more upsetting to her is that her son was finally about to get a taste of freedom when his life was snuffed out. She is puzzled as to how the murderers knew her son had gotten bail and what car he was travelling in.

Duffus added that she had big plans for her last boy, as she had started the process of enrolling him in a vocational school. He lost his life before the ink dried on the paper to establish his future.

“I tell him that I going to get him in a school in Half-Way Tree so that he can do some trading and change up him life,” Duffus said.

This was not the first time Dixon was the target of a gun attack as he was shot eight times five years ago.

Dixon spent three years at the Horizon lock-up for a gun-related charge. He was granted bail some time earlier, but was only released yesterday after the bond was paid in full.

For Duffus, witnessing the murder of her son is a traumatic incident that she will never get over.

“When I hear the shot dem, all mi could a seh, ‘Jesus!’ Mi nuh see nothing else. Mi just inna shock. The person ran back to the car and dem drive off and mi run out a the car and run back in and him (the guy she was travelling with) said see a police car up the road deh. Mi drive down the police and dem tek him out a the car and drive with him go hospital, where they pronounced him dead,” she said.

The family is now left to pick up the pieces as they had been hoping to finally spend a Christmas with their loved one.

“It feel like me have fever right now. Mi caan believe dem kill mi son just like that,” she cried.

Investigations into the murder are ongoing.