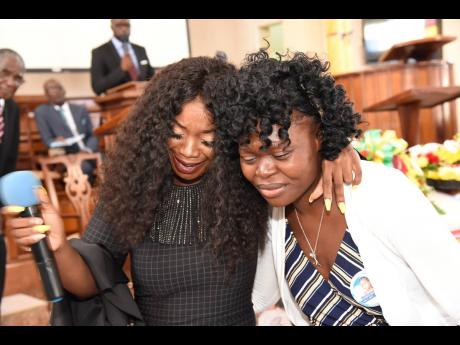 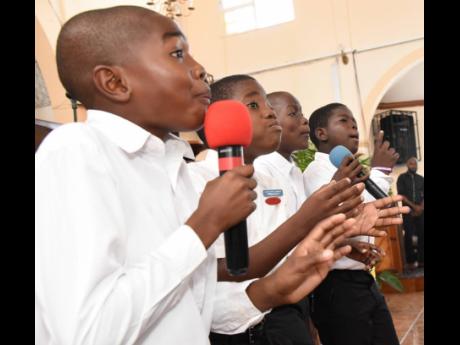 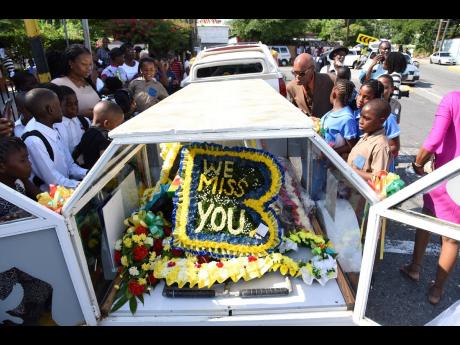 Children gather around the chariot holding Benjamin’s body, as the hearse prepares to head for Dovecot Memorial Park. 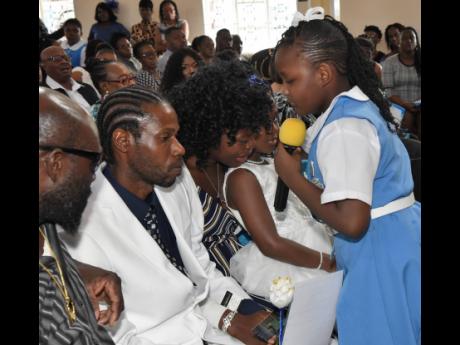 Courtney Greaves (right), a schoolmate of Benjamin’s, offers a rosebud to members of his family during the funeral.
1
2
3
4

Tears flowed yesterday at the North Street Seventh-day Adventist Church at the funeral of seven-year-old Benjamin Bair, the Clan Carthy Primary student who was crushed by a runaway truck on October 28.

Among the mourners was recording artiste Eveana 'Pamputtae' Henry, who could not hold back the tears during her tribute as she sang lyrics from her track Single Mother.

As she hugged Japhene Campbell, Benjamin's mother, she sought to assure her that she was a strong woman who would be able to pull through.

"Despite the struggles that you are going through, despite the fact that you will not see him back, only we know the pressures we bare and we fight through the struggles we face. Japhene, stay strong. You are a strong woman. God have a plan for you. Nuh worry youself," she cried while hugging Campbell.

Pamputtae told THE STAR that she broke down because she knew what it felt like to lose a family member and while she had not lost a child, after speaking with Campbell, she understood her pain.

"From me reach inna the church me a cry. I realised what she has been going through. From she sent her son to school in the morning, a the first and last she a see him back today (yesterday). You see dem thing deh break mi down. Mi lose mi mada, mi sister, and mi grandmada, so mi understand di pain she a feel," she said.

Benjamin was remembered as a very quiet person who was a friend to all.

Teachers said that he had a positive effect on everyone he met and was an inclusive person who believed that everyone needed a friend.

Tanya Williams was Benjamin's grade one teacher and 4-H leader and "a woman that got her heart stolen by a six-year-old".

"The children adored Benjamin. Benjamin was a well-mannered, hard-working student. At the end of the school year, he earned an award for the most disciplined boy. He joined the 4-H club in grade one. In the very last week of our 4-H meeting, he went to the garden to plant pepper seeds. I did not know why, but I took a picture of the seeds in his hand. This is the last picture I will take of him, but the seeds he planted will live forever," Williams said.

Campbell, who cried through the service, could not find the strength to speak. Sade Allen was asked to deliver her tribute on her behalf.

"In loving memory of my son of all the special gifts, great and small, to have you as my son was the greatest gift of all. We shared so much happiness ... and to tell you how much I miss you, I could never find a way. I wish with all my heart that you were here with me and we would share the laughter that will always be. I know that we will meet again ... and those special times, will once again be shared," she read.