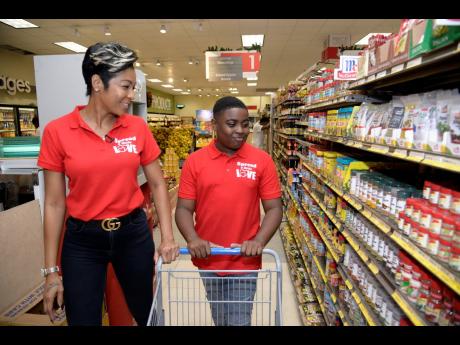 Shorn Hector Dancehall artiste D’Angel and her son, Marco Dean, went Christmas shopping. But it was not about them. Marco Dean, who is the son of superstar Beenie Man, decided he was going to make the Christmas merry for Earl, a less fortunate man who he sees often in the Barbican area of St Andrew.

Fears of reprisal following the murder of two residents on the beach in Mammee Bay, St Ann yesterday forced administrators to close schools in the area as officials sought to protect the students from any possible outbreak of violence.

The fear that gripped the area was reportedly sparked by certain posts that were made on social media following a double murder. The police say the men were shot and killed in an attack on the beach on Sunday.

'Babsy' to address Household Worker of the Year Award ceremony

Gender minister Olivia 'Babsy' Grange, will be the guest speaker at the GraceKennedy/Heather Little-White Household Worker of the Year Award ceremony that will take place on December 17.

The awards began six years ago to give recognition to household workers, and to publicly affirm them and the work they do as dignified, and deserving of respect and appreciation.

GraceKennedy yesterday said that the judges have made their selections for the male and female champions and their runners-up.

The male and female winners will each receive $300,000, as well as prizes from Hi-Lo Food Stores and First Global Bank Limited. They will also receive a cash award to go towards the education of a student of their choice. Runners up will receive $200,000 each. The 2018 winners are Michael Brown and Rosemarie Forrester.

Jamaicans urged to prepare for better jobs in tourism

Tourism minister Ed Bartlett said that the continued competitiveness of the region will significantly rely on how well people are equipped with the right skills for the emerging prospects.

According to Bartlett, the growth of non-traditional markets in Europe, Asia and Central America will require increased focus on cultural studies and the development of competencies in various foreign languages.

"Most importantly, we must equip our citizens with the competitive business management and marketing skills that are required to operate successful tourism enterprises in this globalised era," the minister added.

Four Jamaican students have been honoured by the Caribbean Examinations Council (CXC) in its presentation of awards for outstanding performances in the May/ June 2019 Examinations. The ceremony was held on Thursday, December 5 at the Radisson Grenada Beach Resort in Grenada.

Rhea-Simone Lawrence from the St. Andrew High School for Girls received the ACCA Awardas the most outstanding student across the region in Principles of Accounts at the Caribbean Secondary Education Certificate (CSEC) level.

Carl Webster from Glenmuir High School was the most outstanding candidate in CSEC Caribbean History.

Josh-Oniel Hemans from Guys Hill High School received the CARDI award for being the most outstanding candidate in CSEC Agricultural Science.

Kameika Robinson from the Queen's High School was the most outstanding student in the Humanities for her performance in the Caribbean Advanced Proficiency Examination.

Hundreds of young people in the Spring Village community of St. Catherine are set to benefit from the launch of an IGT After School Advantage Centre (ASA). IGT Jamaica donated computers and a printer to the Spring Village Development Foundation during a ribbon-cutting ceremony recently.

The Spring Village Development Foundation administers a Community Centre, Youth Club and a HEART Trust/National Training Agency Institute in the rural community near Old Harbour, St. Catherine. It is a busy learning hub for youth, adolescents and younger students in the area, with over 300 students pursuing courses in skills such as electrical installation, customer service, commercial food preparation and other areas.

"This donation will help them with their research," principal of the Foundation Kenroy Waldo said.