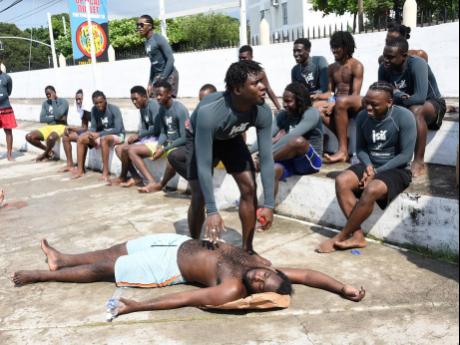 Inner-city youths go through a asimulation exercise during the Jamaica Social Investment Fund-aided lifeguard training programme at the YMCA pool in Kingston on Saturday.

The bill, which will be considered by a joint select committee of parliament, proposes a framework for dealing with sexual harassment in institutions as well as situations involving landlords and tenants.

Grange said sexual harassment “is a serious crime” which “militates against the desired level of peace, harmony and happiness in our country.”

“Through our work in this committee, we can protect all women and men from unwanted sexual advances, requests for sexual favours and crude sexual behaviours that affect quality of life by creating an intimidating, hostile, or offensive environment,” Grange said

The committee is inviting members of the public to give feedback on the Bill ahead of its next meeting early in 2020.

The Committee requests feedback to be sent to the Clerk to the Houses, Gordon House (clerk@japarliament.gov.jm) by Monday, 23 December 2019.

Tell the police what you know – Chuck

Minister of Justice Delroy Chuck is encouraging more Jamaicans to come forward to report crime and corruption in the country.

Speaking at a Child Diversion Sensitisation Session at Glistening Waters Hotel and Attractions in Falmouth, Trelawny, on December 6, the minister said persons must muster the courage to speak out and expose criminals and wrongdoers.

“Far too many of us want to live without being interfered with, without having to come forward, but that’s not what life is. Life is about interaction, and in interacting you are going to meet people who are abusive and also engage in wrongdoing, and when you see them, tell the police,” Chuck said.

One of two motorcyclists who were involved in a collision on the Nompriel main road in Negril, Westmoreland, on Monday, December 9, has died.

He is 26-year-old Jevain Watson of Negril, Westmoreland.

The police said that about 11:45 p.m., Watson was driving a Cobra motorcycle along the Nompriel main road when he allegedly swerved to avoid a collision and crashed into another motorcycle that was being driven in the opposite direction. Both drivers sustained several injuries and were transported to the hospital, where Watson died while being treated.

The condition of the other driver could not be ascertained at press time yesterday.

A gunman was disarmed by a citizen following an attack on the Greendale main road in St. Catherine on Monday.

Reports from the Spanish Town Police are that about 11:40 a.m., the man was standing along the roadway when he was approached by the gunman.

A confrontation ensued between them and the assailant was disarmed. The police were summoned and the firearm – a Browning 9mm pistol – was handed over to them.

The Government wants farmers to increase the number of coffee trees they now have on their farms.

It is estimated that there is an average of between 600 to 650 coffee on each acre of land, and the Government wants that number to rise to 800 plants per acre.

Agriculture minister Audley Shaw said the push for increased tree density is a part of initiatives being undertaken to stimulate future growth of the coffee sector. He said other initiatives include the provision of fertiliser assistance, supplies and training to coffee farmers.

“To date, approximately 27,000 bags of 25lb fertilisers have been distributed to registered farmers in the Jamaica Blue Mountainand Jamaica High Mountain regions. We do need to talk more about this because we have additional fertilisers available,” Shaw said.