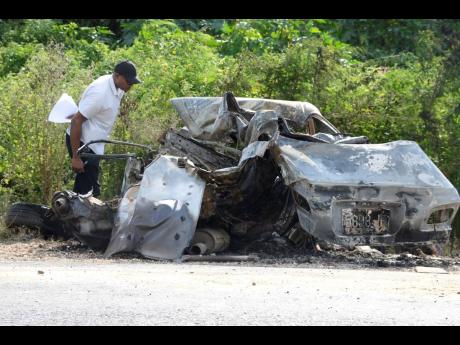 This car burst into fire along Chesterfield Drive in St Andrew last week after being involved in a three-vehlicle crash. Two persons died in the accident.

The driver of a car that bust into flames after it crashed along Chesterfield Drive in St Andrew last week said he is having a hard time coming to terms with the loss of his two colleagues who died as a result of the mishap.

John* yesterday contacted THE STAR, adamant that he did not cause the crash.

"I don't want anyone to hurt my children and I don't want to lose them. I know what it feels like to lose a child because I lost a daughter year before last, so I put myself in their shoes and I know how they feel. I just want people to know that there was no careless driving, I want them to hear my side," he said.

John is scheduled to give a statement to the police this week.

The accident, which cost the lives of two persons, involved three vehicles - a car, a truck, and a tractor-trailer. Eyewitnesses said that some time after 11 a.m., the car, which was heading east towards Marcus Garvey Drive, crashed into one of the rear tyres of the truck, which was heading west towards Seaview Gardens. The car reportedly veered into the path of a trailer, which, in an attempt to escape it, swerved off the roadway.

However, John, while not clear what happened, had a different version of the events.

"That day, we were coming from Caymanas River. I was driving. The two persons that died, we were talking and another girl on the front seat sleeping. Coming on Chesterfield Drive, I got a lick from the back. I don't know what it was. After that I blacked out," he said.

According to John, it was later that day when he woke up in the Kingston Public Hospital that he found out the car burst in flames after it crashed, and that his friends died.

"When I woke up, I asked a lady I saw where I am at and she said I was in the hospital. My brain was shattered because I did not understand what was going on. I was lost. When I heard that my friends died, I started to cry, I broke down," he said.

The 53-year-old John suffered a dislocated shoulder in the accident. He said that people have been unfairly blaming him for the death of the two men but this was not the case.