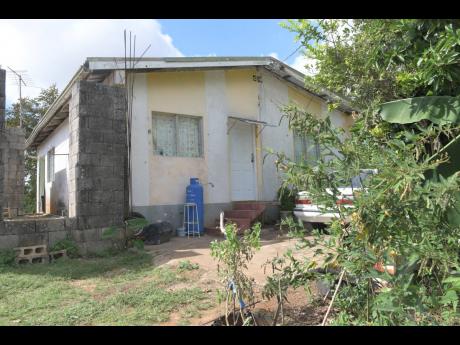 The house where Roy Leon was allegedly killed by his son yesterday morning.

Members of one family in George's Valley, Manchester, are not looking forward to 2020, as they have three funerals to plan.

According to one man who didn't wish to identified, tragedy first struck when his cousin Vivian Scott was shot and killed two weeks ago in Mammee Bay, St Ann.

Then last week, his cousin's sister died after years of suffering from lupus. And just yesterday, his uncle, Roy Leon, was nearly beheaded, allegedly by his own son.

"This just no real; mi still can't believe this," the man said. The son has since been taken into custody by the police.

The cousin told the news team that the suspected murderer had not been acting like himself for a few days.

He said that family members have tried talking to him but he would always say that he was OK.

The family member said that he is overwhelmed with the tremendous losses the family is experiencing.

"Two weeks ago dem kill Vivian a Mammee Bay, mi cousin sister dead Thursday, and a today mi shoulda go pick up her body from May Pen and is this mi wake up to," he said.

"Right now, new year a come and mi nuh feel the new year none at all. We not even collect Vivian body yet and now wi a face this. Mi nuh eat from morning, mi nuh hungry. Mi handle dead but when it hit home it different," he said.