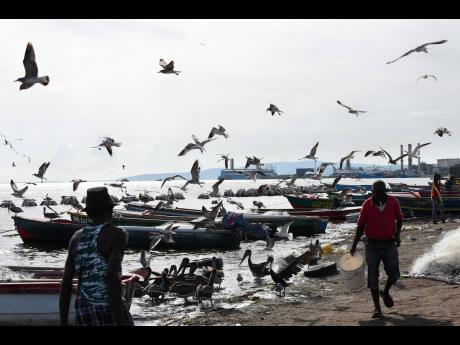 Seagulls, albatrosses and egrets in a feeding frenzy at the Old Harbour Bay Fishing Village in St Catherine.

Desmond Whitley, manager at the Sunbeam Children’s Home, said that education is key to the rehabilitation of the boys. He noted that when they are educated, they tend to make better decisions and do not turn to violence and crime.

“We are grateful to JN Bank for catching this vision. They could have bought clothes, but what they have done is to give us something that we can use to strengthen the abilities of the next generation,” Whitley said.

The manager at the Sunbeam Children’s Home noted that two of its former wards are now pursuing tertiary studies at The University of the West Indies and at a teachers’ college. He accredited their success to the strong emphasis placed on education at the Home.

“The investment in education is an investment in our nation; as the development of our boys will be an asset to Jamaica,” he said.

St Mary recorded 30 murders last year, a decline from 36 the previous year, but the president of the parish's Chamber of Commerce, Frederick Young, believes the murder figure is still too high.

"Domestic violence seems to be on the rise, where persons are not reasoning out things. They are more trying to create mayhem by applying violent ways to deal with the problem,” Young said.

“The Chamber is ready to work with the police and other stakeholders to see if we can come to some solution, maybe go into the schools to talk to the students from an early stage to really guide them into positive thinking, positive outcomes rather than thinking about violence even at their young stage.”

Young said the idea of the Chamber working with the police to reduce crime is to make St Mary a safer and more productive parish and also a place where people will want to grow, to live and to do business.

The Nonesuch Basic School in Portland received a facelift just in time for the resumption of classes today. The repairs were done as part of a joint initiative between the One Jamaica Foundation and a United States-based travel company, NV Tours, with assistance from community residents, who volunteered their time and effort.

“They were in need of repairs to the roof, ceiling, repairs to doors, and bathroom. We also installed a new toilet, as the old one was broken. We are focusing on improving the infrastructure in schools. We are trying to go around the island doing different schools, especially in areas that don’t have that much attention and are in dire need of assistance,”

“We carry-out refurbishing of various sections of the school, “ Gabriel Wood of OJF said.

“When children are more comfortable and are made to feel safer, they will learn. This is quite shocking to the community. We never expected this kind of assistance. This school belongs to the community, and I am sure that from now on, we will get the kind of support needed from community residents. And I expect to see an increase in the student population in short order, as we are more than able to accommodate 30 students,” she said.

The school has two classrooms and a population of 18 students.

Farmworkers off to Canada

The first batch of farmworkers for 2020 began departing the island for Canada on Friday. They will be working under the Seasonal Agricultural Workers Programme this year.

Colette Roberts Risden, permanent secretary in the labour ministry, encouraged the workers to use the opportunity wisely, and to work to the best of their ability.

“You’re not only working for yourselves, your families, your communities, but all of you are working to help build Jamaica and to make Jamaica a better place,” she said.

Shahine Robinson, the labour minister, in a speech read by junior minister Zavia Mayne, reminded the workers that as ambassadors for Jamaica, they are expected to always maintain a good name, character and reputation.

“Wherever a Jamaican goes, much is expected, and only the best will be respected,” she said.

More than 10,000 Jamaican workers go to Canada annually, and about 85 per cent of these are returning workers. Approximately 230,000 persons have participated in the programme in Canada over the years.

The Constant Spring Police seized one .38 revolver and three rounds of ammunition on Peanut Lane in Cassava Piece, St. Andrew on Friday.

According to the Corporate Communications Unit (CCU) of the Jamaica Constabulary Force (JCF) the weapon was found in a plastic bag that was seen at a premises where an operation was taking place. No one was taken into custody in connection with the seizure.

In another incident, one man was taken into police custody after a firearm and several rounds of ammunition were taken from his person on East Street in Greenwich Town, Kingston 13 on Friday.

Reports from the Hunts Bay Police are that about 11:32 p.m., JDF officers were on patrol in the area when the man was observed acting in a manner that aroused their suspicion. He was accosted, searched and one Smith and Wesson 9mm pistol with a magazine containing nine 9mm rounds of ammunition was taken from his waistband.

He was subsequently arrested. His identity is being withheld pending further investigations.

A man was shot and killed along Mountain View Avenue in St Andrew on Saturday morning.

The victim has been identified as 44-year-old Lindon Bernard, who resided in Seven Miles, Bull Bay, St Andrew.

It is reported that shortly after 7 o’clock Bernard was driving his motorcycle along Mountain View Avenue, in the vicinity of Excelsior High School, when a motor car approached.

The occupants of the car opened fire, hitting Bernard before escaping, according to the police.

He was taken to hospital by a police team that was in the area, but could not be saved.

There has been a flare-up of violence between rival gangs in the Mountain View area since October last year.

The violence has left at least ten people dead, including a man who was shot several times as he sat inside a Vineyard Town doctor’s office with his wife and their infant daughter.