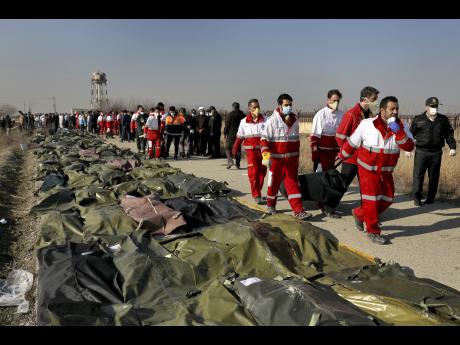 AP PHOTO - Rescue workers carry the body of a victim of a Ukrainian plane crash in Shahedshahr, southwest of the capital Tehran, Iran on Wednesday. A Ukrainian passenger jet carrying 176 people crashed on Wednesday, just minutes after taking off from the Iranian capital's main airport, turning farmland on the outskirts of Tehran into fields of flaming debris and killing all on board.

A Ukrainian passenger jet carrying 176 people crashed on Wednesday, just minutes after taking off from the Iranian capital's main airport, turning farmland on the outskirts of Tehran into fields of flaming debris and killing all on board.

The crash of Ukraine International Airlines came hours after Iran launched a ballistic missile attack on Iraqi bases housing U.S. soldiers, but Iranian officials said they suspected a mechanical issue brought down the three and a half-year-old Boeing 737-800 aircraft. Ukrainian officials initially agreed, but later backed away and declined to offer a cause while the investigation is ongoing.

The plane carried 167 passengers and nine crew members from different nations. Ukraine's foreign minister, Vadym Prystaiko, said that there were 82 Iranians, 63 Canadians and 11 Ukrainians on board – the Ukrainian nationals included two passengers and the nine crew. There were also 10 Swedish, four Afghan, three German and three British nationals, he said.

Airline officials said most of the passengers were en route to the Ukrainian capital, Kyiv, transiting through there to other destinations. Staff at the Boryspil airport in Kyiv, told The Associated Press that passengers on this flight are usually Iranian students coming back to Ukraine after winter holidays.

Ukraine's President Volodymyr Zelenskiy extended his condolences to the families of the victims. His office said he had cut his visit to Oman short and was returning to Kyiv because of the crash. The country's Prime Minister Oleksiy Honcharuk confirmed the casualty toll.

Zelenskiy, the Ukrainian president, ordered a sweeping inspection of all civil aeroplanes in the country, “no matter the conclusions about the crash in Iran.”

The plane had delayed from taking off from Imam Khomeini International Airport by almost an hour. It took off to the west, but never made it above 8,000 feet in the air, according to data from the flight-tracking website FlightRadar24.

The plane, fully loaded with fuel for its 2,300-kilometer (1,430-mile) flight, slammed into farmland near the town of Shahedshahr on the outskirts of Tehran. Videos taken immediately after the crash show blazes lighting up the darkened fields before dawn.

Resident Din Mohammad Qassemi said he had been watching the news about the Iranian ballistic missile attack on U.S. forces in Iraq in revenge for the killing of Revolutionary Guard Gen. Qassem Soleimani when he heard the crash.

“I heard a massive explosion and all the houses started to shake. There was fire everywhere," he told the AP. “At first I thought (the Americans) have hit here with missiles and went in the basement as a shelter. After a while, I went out and saw a plane has crashed over there. Body parts were lying around everywhere.”