ONE MINUTE READS … News across Jamaica 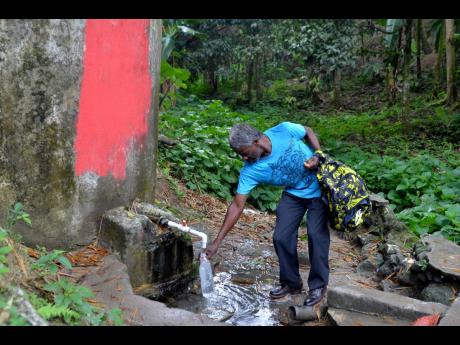 Silburn Pinnock catches water in a bottle for drinking from a tank in Goulbourne Valley, St Andrew. Juliet Cuthbert-Flynn, in whose St Andrew West Rural constituency the community falls, said infrequent water supply is an ongoing problem in Lawrence Tavern and surrounding communities. She said, too, that the pipes in Goulbourne Valley need upgrading. 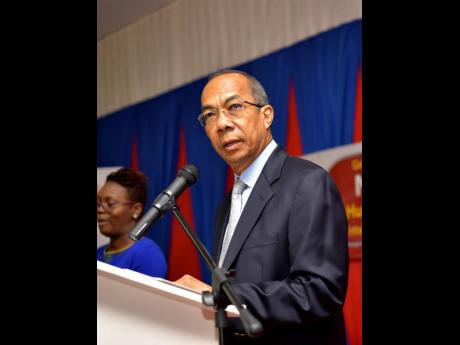 A road in Norwood, St James has been named for Dr. Horace Chang, the Member of Parliament for North West St. James where the roadway is located.

The stretch, which runs from the Ironshore/Quebec Avenue intersectionhas been officially renamed the Dr. Horace Chang Boulevard. The popular thoroughfare often serves as a bypass road for motorists entering and exiting Montego Bay.

Speaking at a ceremony to commemorate the change, Montego Bay Mayor, Homer Davis, said the roadway was conceptualised and built by Dr. Chang in his capacity as Member of Parliament for North West St. James.

He said based on the extent of the Dr. Chang's stewardship in the constituency, particularly in Norwood, the decision to rename the road, "while he is still around to appreciate the fruit of his hard work", was deemed fitting.

Chang has been the MP for North West St James since 2002.

NO EXRADITION REQUEST FOR Government MINISTER SAYS US EMBASSY

The United States Embassy in Kingston has dismissed as false, information that a request has been made for the extradition of a member of the Andrew Holness-led Government.

"Contrary to social media rumours, there is no extradition request(s) for any minister of the Jamaican Government from the United States Government," the embassy said in a media release.

It said that the "Jamaican Government has been very cooperative with the United States Government on these matters".

Commenting on social media, Holness said that "The PNP operatives who have been carrying rumours and fake news should know that the era of social media is not just for those who would seek to use it negatively, more so it is a tool for transparency, clarity and integrity".

The Custos of Manchester and the police in the parish have collaborated to develop strategies to address the social-ills within the parish.

Garfield Green, the custos, noted that 36 per cent of the total crime statistics in the parish is related to domestic violence and disputes.

Green has convened a group of concerned administrators and leaders of some Manchester-based organisations to provide support to the Manchester Police and the citizens of the parish. He said that recent murders associated with domestic disputes have been a major cause for concern in the parish and is the immediate focus of this group.

Two illegal guns off the streets

Four persons, including a female and a male teen, are to face the court in relation to an illegal firearm and ammunition was seized during an operation in Pondside, Hamilton Mountain, Port Maria in St Mary on Sunday.

Reports from the Port Maria Police are that about 5:00am, lawmen were in the area when a premises, which was occupied by the four persons was searched. A homemade firearm with one 12 gauge cartridge was reportedly found in their possession. They were subsequently arrested and charged.

In the meantime, a Colt M16 assault rifle with a magazine containing thirty 5.56 rounds of ammunition was seized by the Police along Mountain View Avenue, Kingston 3 on Saturday.

Reports from the Elletson Road Police are that about 4:00am, lawmen were on patrol in the area when a premises was searched and the weapon along with ammunition were found.